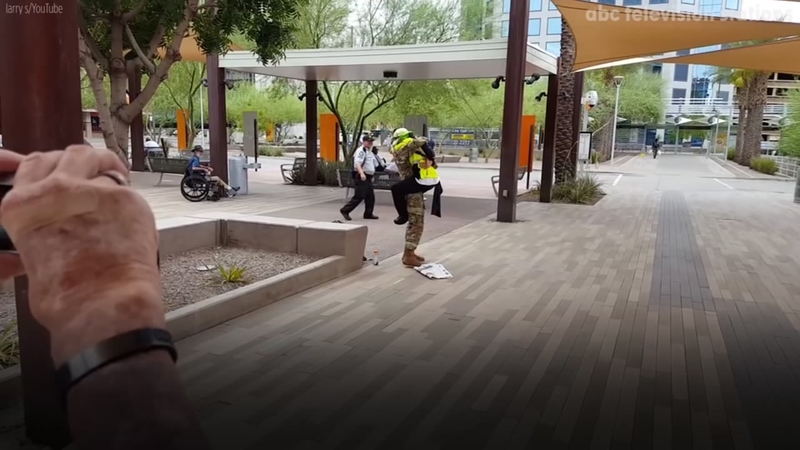 A mother of a soldier in Phoenix, Arizona, was not expecting to see her son for another month. But as she was walking around at her job, she spotted a familiar face.

Larry Sterns serves in the 101st Airborne Division of the Army at Fort Campbell in Kentucky. He wrote on YouTube that he told his mom, Denise, that he would have time off at the end of July, but that was not the case. He actually came home a month earlier.

Sterns and his family decided to surprise his mom at her job as a custodian at Phoenix's Central Station. Larry's grandfather, Terry, and his uncle, Hugh, helped plan and record the surprise. A police officer joined in by sending Denise in Larry's direction under the pretense that a mess needed cleaning up.

When Denise caught sight of her son, her reaction was priceless. She walked right by him, did a double-take, and then, when she realized it was really him, she rushed into his arms and wrapped her whole body around him in a hug.

"It was a very emotional moment for all of us, even the police officer got choked up," Hugh Sterns told ABC via email.

Larry was only home for a few days, but he wrote that it was "probably my best gift to her yet."
Related topics:
family & parentingsoldiersu.s. & worldhomecoming
Copyright © 2021 WTVD-TV. All Rights Reserved.
TOP STORIES
RPD chief hopes 'Shop with a Cop Day' helps community relations
CNN fires Chris Cuomo following suspension, investigation
Friends mourn loss of Rolesville teen killed in hit and run
Passenger jumps out of plane taxiing at Phoenix airport
Parents charged in school shooting arrested, plead not guilty
Homeowners burn down house in attempt to get rid of snakes
Show More
Pedestrian killed on US 401 identified as Rolesville HS student
Tensions between US, Russia escalate ahead of Biden-Putin call
Money found inside megachurch walls possibly tied to 2014 theft
COVID-19 metrics climb after Thanksgiving but still far below 2020
Contact tracing revs up as omicron cases detected in several US states
More TOP STORIES News