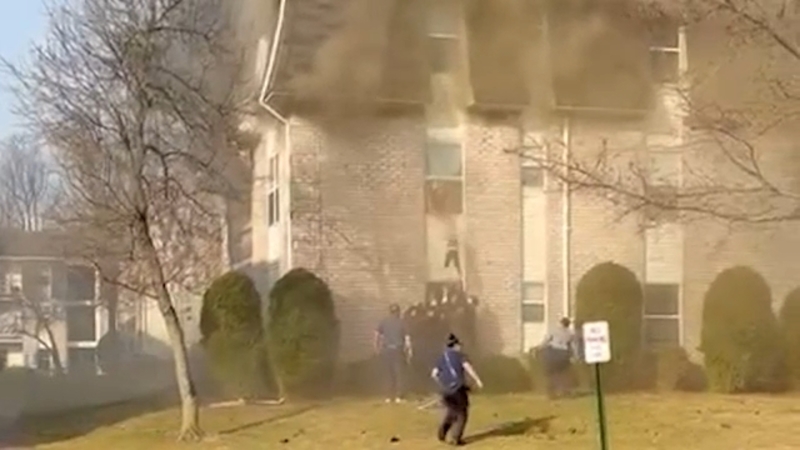 SOUTH BRUNSWICK, New Jersey -- A father dropped his 3-year-old son out a second-story window to first responders below as a fire raged through an apartment complex in New Jersey Monday morning.

The flames broke out just after 8 a.m. in South Brunswick.

First responders saw a man sticking his head out the window of a second-floor apartment with smoke pouring out after they initially thought all 25 apartments in the building were empty.

"The fact that he was sleeping, and we pounded on those doors," Fire Chief Chris Perez said. "I mean, we were making a lot of noise."

The man disappeared as the officers shouted from the ground for him to hurry, and he then reappeared with the toddler.

"When he went back in, I didn't know what he was going back in for, and that kind of concerns us when something like that happens," Perez said. "So luckily, he came back fairly quickly with the child."

The man lowered his son out the window, feet first, and dropped him to the group, consisting of officers, the fire chief and a construction worker who was nearby.

"It's a lot because you're trying to put yourself in his shoes to think, hey, you're dropping your kid down," Sgt. William Merkler said. "I can't even imagine what was going through his mind."

He then lowered himself out the window head first and fell to the group. He walked away dazed but with minor injuries.

"You can almost hear my voice, like I'm a little frustrated," Detective Sgt. John Penney said. "Alright, we thought the building was evacuated, and there's somebody at the window."

The fire was under control by 11 a.m.

Four people -- the father, son, a firefighter and a police officer -- were all treated for minor injuries.

"I mean this is what we signed up for," Patrolman 1st Class Ryan Bartunek said. "This is the exciting part of the job, that you want to be able to help people and do the right thing. Luckily we helped save those people."

The Red Cross was on the scene assisting about 50 residents from 15 families who were displaced by the fire.