Inside the space hotel scheduled to open in 2025 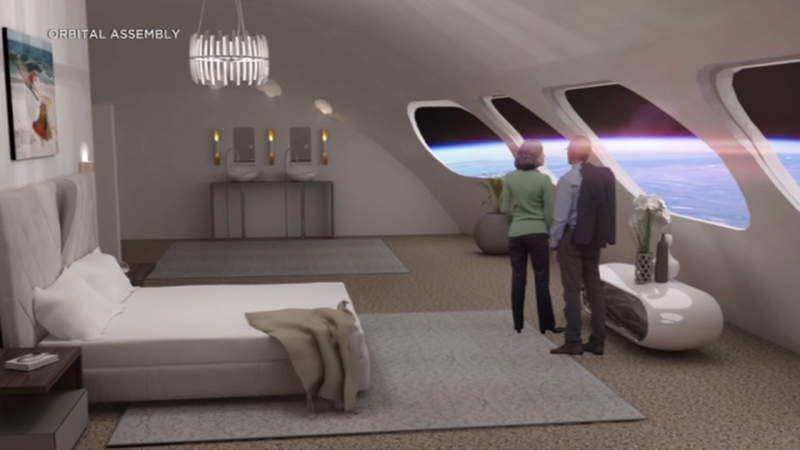 Inside the space hotel set to open in 2025

Waking up in a chic hotel room with a view of the solar system could be the future of travel, at least if space company Orbital Assembly has anything to say about it.

The U.S.-based company has revealed new information and concepts for its space hotel idea, designs for which have been orbiting since 2019.

Originally premiered by Californian company the Gateway Foundation -- and then called the Von Braun Station -- this futuristic concept consists of several modules connected by elevator shafts that make up a rotating wheel orbiting the Earth.

The project is now being overseen by Orbital Assembly Corporation, a space construction company that cut links with Gateway.

Orbital Assembly is now aiming to launch not one but two space stations with tourist accommodation: Voyager Station, the renamed original design, is now scheduled to accommodate 400 people and to open in 2027, while new concept Pioneer Station, housing 28 people, could be operational in just three years.

The goal, says Orbital Assembly, is to run a space "business park" home to offices as well as tourists.

Space tourism seems closer than ever before -- over the past year, billionaire Virgin founder Richard Branson blasted into suborbital space with his company Virgin Galactic, while Star Trek actor William Shatner became the oldest person in space thanks to a jaunt with Blue Origin.

But there's still a pretty unbelievable price point attached to any space trip, which makes it hard for many of us to actually envisage spending our annual leave out of this world.

"The goal has always been to make it possible for large amounts of people to live, work and thrive in space," Alatorre told CNN Travel in a new interview.

A home away from home

Alatorre says the appeal of new concept Pioneer Station is that its smaller scale makes it achievable sooner.

"It's going to get us the opportunity to have people start to experience space on a larger scale, faster," he said.

Office spaces and research facilities will also be up for rent on both Pioneer Station and Voyager Station.

This, said Alatorre, is a "win-win" for Orbital Assembly, as a lot of its near-term goals are funding-dependent.

In a 2019 interview with CNN Travel, Alatorre explained the physics of Voyager Station as working like a spinning bucket of water.

"The station rotates, pushing the contents of the station out to the perimeter of the station, much in the way that you can spin a bucket of water -- the water pushes out into the bucket and stays in place," he said.

Near the center of the station there would be no artificial gravity, but as you move down the outside of the station, the feeling of gravity increases.

The physics haven't changed, said Alatorre more recently. But, he explained, as Pioneer Station will be smaller, its gravity level would be different. There will still be what he calls the "comforts" of artificial gravity, like showers, the ability to eat and drink sitting down, but the spaces with less gravity will allow for even more fun, space quirks.

Renderings of the interiors for both stations suggest an interior not dissimilar to a luxury hotel here on earth, just with some additional out-of-this-world views.

Alatorre, who has a background in architecture, has previously said the hotel's aesthetic was a direct response to the Stanley Kubrick movie "2001: A Space Odyssey," which he called "almost a blueprint of what not to do."

"I think the goal of Stanley Kubrick was to highlight the divide between technology and humanity and so, purposefully, he made the stations and the ships very sterile and clean and alien."

The space hotel's original name, Von Braun Station, was chosen because the concept was inspired by 60-year-old designs from Wernher von Braun, an aerospace engineer who pioneered rocket technology, first in Germany and later in the U.S.

While living in Germany, von Braun was involved in the Nazi rocket development program, so naming the space hotel after him was a controversial choice.

"The station is not really about him. It's based on his design, and we like his contributions towards science and space," said former Orbital Assembly CEO John Blincow, who is no longer associated with the company, in a 2021 CNN Travel interview. "But you know, Voyager Station is so much more than that. It is the stuff in the future. And we want a name that doesn't have those attachments to it."

'Not just the wealthy'

Alatorre said his team have "talked to pretty much everybody" in the space industry about collaboration.

"But the one thing that all of these companies are missing is the destination, right?" said Alatorre. "It's kind of like if you want to go see the Grand Canyon and you drive past it and come right back home."

The International Space Station has hosted tourists in the past, including the world's first space tourist Dennis Tito in 2001. But Alatorre suggests the ISS is primarily a place of work and research, and Orbital Assembly's space hotel fulfills a different niche.

"There's not wires everywhere, it's a comfortable space where you feel at home," he added.

As billionaires pump money into space, there's also a growing backlash against space tourism, with many people suggesting the money could be better spent on Earth.

In response to this criticism, Alatorre suggested that "a lot of life-changing technologies" stem from space exploration, like GPS.

"Those kind of closed loop systems are going to change the culture, the way people think about resource utilization," he said.

"Our environment isn't just Earth, it's the entire solar system. And there's so many resources out there, as we start to utilize and capitalize on those resources that's going to change and improve the standard of living here on Earth."

Despite the fact the cost of a ticket to space is currently hefty, according to Alatorre, space tourism won't just be for billionaires.

"We're doing everything we can to make space accessible to everyone, not just the wealthy," he said.

As well as cost, there are other roadblocks to creating a space community, said Alatorre, namely figuring out how much artificial gravity will be needed, and navigating current guidelines surrounding space radiation exposure.

But as tourists wouldn't necessarily stay for more than a couple of weeks, Alatorre suggested this wouldn't impact visitors, and would be more an issue for those working on the stations.

Jeffrey A. Hoffman, a former NASA astronaut who now works in MIT's Department of Aeronautics and Astronautics, told CNN Travel last year that a big roadblock for space tourism will be safety fears.

But Hoffman suggested that, as with air travel, a consistent safety record will get the concept off the ground, even with continued risk of accidents.

"I am excited about the idea that many, many more people will be able to experience being in space, and hopefully bring back to Earth a new sense of their relationship with our planet," said Hoffman, who suggested the word-of-mouth effect will also be key.

"When the word gets back and these initial travelers tell their tales -- you're not going to be able to keep people away." he said.

"For people who are naysayers or doubters, what I've always said is 'Give us time. It's going to happen. It doesn't happen overnight. And just wait us out, prove us out. And we'll show you what we're doing as we go along and then you can make your judgment."