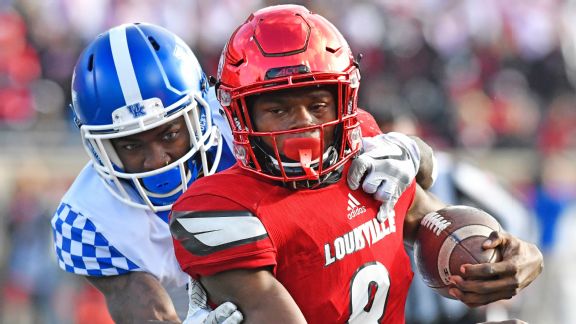 Louisville quarterback Lamar Jackson's three-interception performance -- in a second straight upset loss -- made a bettor holding a potential $10,000 ticket on the Heisman Trophy favorite nervous enough to put what seems like a genuine lock up for sale.

On Sunday, a $100 ticket on Jackson to win the Heisman Trophy was posted on Nevada sports betting market site PropSwap, a service that allows customers to buy and sell live tickets. The $100 bet on Jackson was placed at the Westgate SuperBook when he was a 100-1 long shot before the season.

Per Nevada Gaming Control regulations, the state's sportsbooks halted betting on the winner of the Heisman Trophy on Nov. 20. Jackson closed as a massive 1-50 favorite at the SuperBook, but that was before the Cardinals lost straight-up to Kentucky as 28-point favorites. Point spread-wise, it's the second-biggest upset of the season to this point, behind only South Alabama's win over Mississippi State as a 28.5-point underdog.

The current owner of the $10,000 Jackson ticket bought it from the original bettor for $4,000 in the middle of the season. He became concerned about not only Jackson's performance against Kentucky, but also didn't like that his perceived closest competition -- Washington quarterback Jake Browning and Clemson quarterbackDeshaun Watson-- will each be playing in championship games this week, while Jackson won't be.