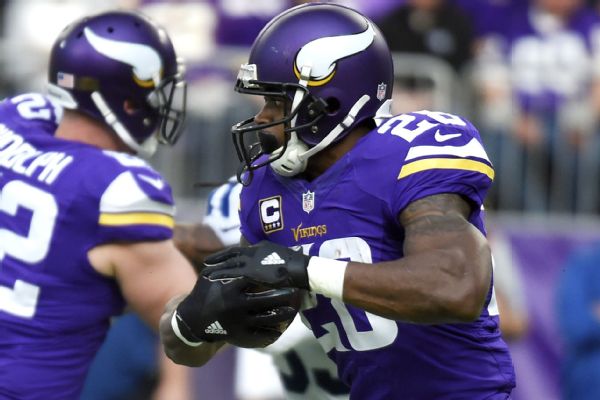 MINNEAPOLIS -- After a 34-6 loss to the Indianapolis Coltson Sunday pushed the Minnesota Vikings to the brink of playoff elimination, running back Adrian Peterson said he plans to play against the Green Bay Packers at Lambeau Field on Saturday.

Peterson did not address what he would do if the Vikings are eliminated from playoff contention by their next home game, on Jan. 1 against the Chicago Bears.

"I'm not going to go jump ahead to two weeks," Peterson said. "I'm going to just look forward to this week."

When he was asked whether he'd play against the Packers if the Vikings are eliminated from the playoff race before the game, Peterson said, "I just said it. Should I answer it a different way?"

The running back returned from a torn meniscus on Sunday against the Colts, less than three months after he'd been injured against the Packers on Sept. 18. He said he "felt good enough to come out and play" on Sunday, but his return left Peterson with few options to assert himself. The running back gained just 22 yards on six carries in the loss, fumbling at the end of a 13-yard carry in the second quarter. He carried the ball just twice in the second half.

"It was tough," he said. "You look at the scoreboard, down by a couple touchdowns, and the run game is kind of irrelevant at that point. Of course, I don't like being on the sideline, but I have faith in [fellow RBs]Matt [Asiata] and Jerick [McKinnon]. I just did not imagine it going this way today."

Peterson's fumble came at the end of his longest carry of the season, when Colts safetyMike Adams forced the ball out as the running back was going down.

"I remember pushing with my left arm, and as I went down the ball got loose," Peterson said. "I don't know if someone hit it out, but it was a poor job by me with ball security."

Sources told ESPN last month that Peterson was shooting to return against the Colts or Packers. He returned to practice this week, saying he planned to come back for the Green Bay game, but Peterson and the Vikings pushed forward the timetable after the running back had a solid week of practice.

Now Peterson, who said earlier this month it would be "pointless" to return this season if the Vikings weren't in the playoff race, will have to hope for a scenario that keeps the Vikings' hopes alive as they head to Lambeau Field on Saturday.

"I did not imagine that happening [after a 5-0 start]," he said. "I know how it can go throughout the season; it can switch on you. Unfortunately, that is what has happened to us, but we are just going to continue to fight. There is still opportunity that I am holding on to."

Peterson fumbles in Vikings' loss
In the second quarter of Sunday's game against the Colts, Vikings RB Adrian Peterson gets the ball stripped and recovered by Mike Adams.