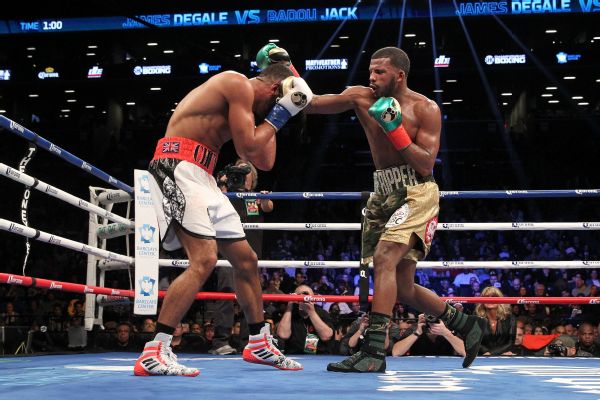 NEW YORK -- James DeGale and Badou Jack, with so much on the line in the first major bout of the year, put on a tremendous fight with enormous stakes. They were meeting to unify their super middleweight world titles and to earn recognition as the clear-cut best 168-pound fighter in the world.

And now they probably will have to do it again after the action-packed fight ended in a draw, with judge Glenn Feldman scoring the bout 114-112 for DeGale and judges Julie Lederman and Steve Weisfeld both scoring it 113-113.

ESPN.com also scored the fight 114-112 for DeGale, who barely survived a brutal 12th round before 10,128 at Barclays Center in Brooklyn.

Both fighters retained their belts for the third time.

It was the second draw in a row for Jack, who was held to a more controversial draw against Lucian Bute in April on the same card on which DeGale won his fight against Rogelio "Porky" Medina. Most thought Jack (20-1-3, 12 KOs) easily won that fight.

Of course, DeGale also thought he deserved the decision.

"I've got huge respect for this man, but I thought I won that," DeGale said. "I landed the cleanest shots."

Jack salvaged the draw with a huge final round when he dropped DeGale and nearly stopped him. Had DeGale not gotten knocked down in the final round, he would have won a unanimous decision.

It was that close, that dramatic and that memorable.

"It was sensational," said Lou DiBella, co-promoter of the card. "Those were two men, two real friggin' men. That's what it's supposed to be. DeGale's balls in the last round is a monument to who he is. I thought Jack was down, and he needed to climb back into the fight, and he did. Lot of close rounds. Great night for boxing."

Floyd Mayweather, Jack's promoter, disagreed, complaining about the scoring, saying that Jack deserved to win and calling it a bad night for boxing. But it sure didn't seem that way thanks to a hotly contested fight between the two best in the weight class who put on a fight that could be in the conversation for fight of the year honors come December -- even though it's so early.

"This is the second time in a row Badou has gotten a bad decision," Mayweather said. "James DeGale is a hell of a fighter, but tonight he didn't win. At the end of the day, I don't know what the judges are looking at."

Not much had happened in the feeling-out first round when, with about 25 seconds remaining, DeGale, a southpaw, lunged at Jack and caught him with a clean straight left hand on the chin to knock him down. Jack did not appear hurt and he easily beat the count, but it gave the round clearly to DeGale.

Although DeGale, fighting on the road in his fourth consecutive fight in North America, did not replicate the knockdown in ensuing rounds, he was boxing well and from an ideal distance. He fired quick combinations and used his better foot speed to turn on Jack and give him angles.

The end of the fifth round featured an unusual situation. As the round came to a close, referee Arthur Mercante went to separate the fighters and Jack accidentally caught him on the chin with a left hand. Mercante staggered but was OK and even joked with Jack between rounds by taking a sip of his water.

The action heated up in the sixth round with Jack moving forward and putting DeGale, 30, on the ropes as he fired numerous punches. Many missed, but Jack also connected with some solid blows, including a right hand to the body. They finished the round in an extended exchange as the crowd cheered wildly.

Early in the eighth round, Sweden's Jack, 33, who lives in Las Vegas, knocked DeGale's mouthpiece out -- and one of his teeth -- and continued to land shots until Mercante called a brief timeout during a lull in the action to have the mouthpiece put back in his mouth. But Jack kept it up when the fight resumed in a big round as DeGale's right eye was swelling.

Jack knocked DeGale's mouthpiece out again in the ninth round. It had become a war of attrition, with both fighters really digging down in the back-and-forth 10th round in which each landed clean punches.

Before the 11th began, the ringside doctor examined DeGale's mouth, perhaps because of the missing tooth. With the crowd in a frenzy, the fighters went after each other in the final round, but it was Jack who landed a huge right hand and knocked DeGale down midway through. He was bleeding from his eye, his face was a wreck and Jack knocked his mouthpiece out yet again, but he held on to make it to the final bell to end a tremendous fight.

"I had to dig down deep and try to knock him out and finish strong," Jack said. "I definitely finished strong. If it wasn't for the flash knockdown, it's a different result. I was never hurt on the knockdown. My feet got tangled a little bit, but I need to watch it again.

"I had him before the knockdown even happened. I knocked his tooth out. He couldn't keep his mouthpiece in after that. It's the third time now I've had a draw I didn't agree with. I'm the so-called home fighter and it still happened. Next time I have to knock him out. That's it."

"Let's do it again at light heavyweight. It's time to move to light heavyweight," said Jack, who has struggled to make weight and indicated before the bout that this probably would be his last bout at 168 pounds.

Said Mayweather: "Badou Jack has got too big for 168 pounds. We had plans after this fight to move up to light heavyweight."

DeGale might have to move up in weight also for the rematch he wants.