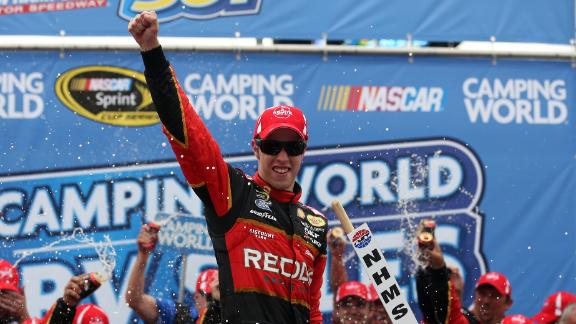 LOUDON, N.H. -- Brad Keselowski hopped out of his car and grabbed an oversized broom to give a playful sweep of all the confetti already collected around his Ford.

He then truly savored his victory, snagging a New England lobster and raising it in triumph.

Keselowski survived without a cut, splinter or pinch. He didn't even fumble his championship crustacean. For once, his victory celebration was as perfect as his performance on the track.

He completed a flawless weekend at New Hampshire Motor Speedway and won Sunday under a green-white checkered finish. Keselowski followed up Saturday's Nationwide Series victory with his first Sprint Cup win at New Hampshire, dominating in the No. 2 Ford for his third victory of the season.

The 2012 Sprint Cup champion is now tied with Jimmie Johnson for the series lead in wins.

"This was just such a phenomenal weekend and these don't happen that often," he said.

Keselowski had been in a slump with, of all things, his Victory Lane fun.

He needed four stitches to close a wound he received during his Victory Lane celebration in the Sprint Cup race at Kentucky. He tried to open the bottle of champagne by hitting it against a podium, and the bottle broke and cut his hand.

Keselowski dropped the American flag out of his No. 22 Ford on Saturday and it was retrieved by an official to let the frivolity continue.

He joked he brought Kevlar-reinforced gloves that were touted as cut-proof.

"Apparently, I've got to win more and I'll get better at it," he said. "I think everybody got to hold the lobster. We're looking forward to eating the lobster later this week. I hear they're going to overnight the meat."

He'll get a taste of Loudon the Lobster -- yes, that's its name -- a 20-pounder caught off the coast of New Bedford, Massachusetts.

Keselowski keeps pilling up wins and has proved he may be even better than he was during his '12 championship run.

"I think in a lot of ways, we're stronger than that," he said. "I don't think we've had this much speed before."

After the last caution came with four laps left, Keselowski pulled away on the final restart to become the first driver to sweep the weekend in track history. He had the fastest car most of the weekend, even leading the speed charts during both Sprint Cup practices on Saturday.

"You can't have a great car if you don't have the best driver," team owner Roger Penske said. "I can tell you today, there was nobody that could beat him."

Keselowski and Dale Earnhardt Jr. clinched spots in the Chase for the Sprint Cup championship, provided they attempt to qualify for the final seven races before the cutoff.

Busch said the No. 18 Toyota never had enough to mount a serious challenge.

"I don't think anybody did," he said.

Joey Logano was running inside the top five late in the race when he connected with Morgan Shepherd. The 72-year-old Shepherd, who extended his mark as the oldest driver to start a race in NASCAR's Sprint Cup series, was about 15 laps down when his No. 33 slid up into Logano.

"I feel like there should be a driver's test before you get out in a Cup car and make sure you know how to drive before you drive one," Logano said.

Shepherd was 39th and completed 278 laps. He was never warned about not meeting the minimum speed of 115.875 mph.

"It's an accident. Those things happen," NASCAR vice president of competition Robin Pemberton said. "It could happen to anybody. It could happen with any competitor."

Johnson, the six-time NASCAR champion, was knocked out of the race early after two rear left tire issues. The first time the tire was flat; the second time, the tire exploded and slammed the No. 48 Chevrolet into the fence. He finished 42nd.

Four fully functioning tires might not have helped even Johnson catch Keselowski.

"I think we have a lot of potential still left in our team," he said.