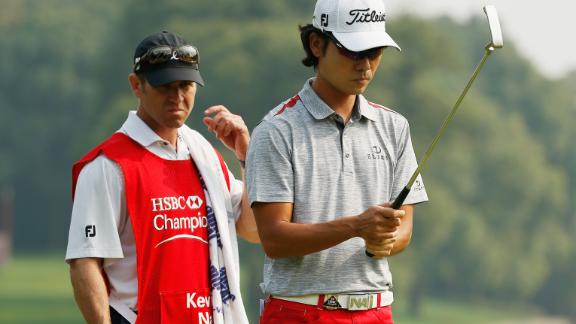 ESPN
A group of professional tour caddies has filed a class-action lawsuit against the PGA Tour demanding compensation for wearing bibs during competition.

In the 39-page lawsuit filed in United States District Court in California, the 81 caddies named as plaintiffs in the suit claim the PGA Tour made $50 million on the bibs during the 2013-14 PGA Tour season. The lawsuit says the caddies "are made to serve as billboards to advertise, at the direction of the PGA Tour, for some of the most profitable companies in the world without compensation."

It is unclear what exactly the caddies are seeking in total compensation, but they are also asking for punitive damages, arguing that the PGA Tour's "conduct was intentional, reckless, and malicious." The lawsuit says the evidence in the case "will reveal a method of determining actual loss" for the caddies.

The caddies are also seeking statutory damages of $750 per violation, although the definition of a violation isn't spelled out in the court documents.

"This lawsuit is intended to protect the rights of caddies who are required to endorse tour sponsors with zero compensation from the PGA Tour,'' said Gene Egdorf, the caddies' Houston-based lawyer. "Any working professional deserves to be paid based on the income they generate, but that's not happening on the PGA Tour.''

A spokesperson said the PGA Tour had no comment on the pending lawsuit.

Named as the two class representatives were Mike Hicks, the caddie for Payne Stewart when he won his last U.S. Open, and Kenny Harms, who currently caddies for Kevin Na and is a board member of the Association of Professional Tour Caddies.

PGA Tour players are considered to be independent contractors who employ their caddies individually.

The lawsuit incorporates caddies on the Web.com Tour and Champions Tour, and it also asks for an injunction to prevent the PGA Tour from forcing caddies to wear the bibs. The plaintiffs stated that they have met with PGA Tour officials to try to discuss the matter, but have been told "the bib is off the table," according to the lawsuit.

The court documents levy several serious claims against the PGA Tour, alleging that caddies were coerced into wearing the bibs and that tour officials "contacted tour players to determine whether players would be willing to terminate their agreements with caddies who refuse to wear the bibs." It also requests a permanent injunction to keep the PGA Tour from revising its rules and regulations so as not to allow something similar to happen in the future.

Also mentioned in the lawsuit is a complaint that the tour has denied caddies access to health care and pension plans.

Information from The Associated Press and ESPN.com's Bob Harig and Michael Collins contributed to this report.