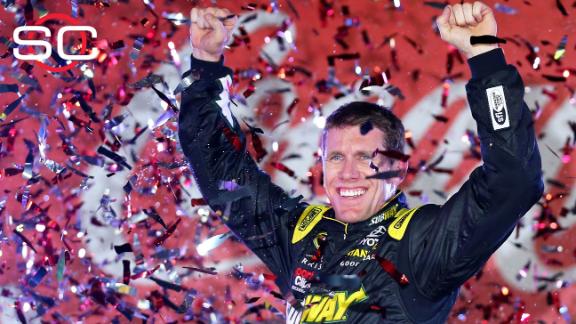 CONCORD, N.C. -- Even a master strategist like Joe Gibbs wasn't sure his team made the right call.

The Super Bowl-winning coach and owner of Joe Gibbs Racing had followed driver Denny Hamlin, who was on top down the stretch in the Coca-Cola 600. But when Hamlin went to the pits to fix a wheel vibration, Gibbs saw team newcomer Carl Edwards was out front as his fuel was dwindling down.

"I turned around with nine to go and said, 'We can't make this, can we?'" Gibbs said.

Yes, they could. Edwards outlasted Greg Biffle over the final 20 laps to win the Coca-Cola 600 and take his first victory since joining JGR this season.

"I just had this feeling that we were gearing up for some really great stuff," Edwards said. "I guess for me, it's relief because I don't have to worry about the points."

Edwards is the third Gibbs racer with a victory this season, joining Matt Kenseth and Hamlin as likely entrants for the 10-race, end-of-the-season championship chase.

Still, it took crew chief Darian Grubb's call to pit earlier than most and stay out on the track while others scrambled to tank up and get fresh tires.

"We were not going to win this race on pure speed. That was obvious the first 550 miles or so," Edwards said. "So [Grubb] put us in a position to win. Those guys were definitely fast, and Darian beat them to it."

Edwards hadn't won in 31 races since June at Sonoma Raceway. He ended his long association with Roush Fenway Racing this past offseason, hoping for bigger things with JGR.

He got it at Charlotte Motor Speedway after shuffling in front as most of his competitors needed green-flag pit stops close to the end. Most figured Edwards would have to stop, too, but he remained on the track and cruised to his first victory at Charlotte.

Edwards parked his car, did his signature backflip and rushed into the waiting arms of his crew, who were all jumping around in celebration. He climbed into the stands to grab the checkered flag before heading to Victory Lane.

The win gave JGR a Charlotte sweep afterHamlin won the All-Star Race on May 16.

Hamlin looked like he might gain the sweep on his own, leading the pack with less than 50 laps remaining. But Hamlin felt a vibration in a wheel and had no choice but to head to the pits to straighten out -- costing him his chance at the victory.

Hamlin finished eighth then went to the care center to get checked out after complaining of migraine headaches. He returned to congratulate Edwards, feeling better after taking fluids.

The fourth Joe Gibbs racer, new father Kyle Busch, was 11th in his first points race since breaking his right leg and left foot in a crash at Daytona three months ago.

Edwards capped racing's biggest day. It began when Nico Rosberg got his third straight win at the Monaco Grand Prix. It continued in Indianapolis when onetime NASCAR driver Juan Pablo Montoya won the Indy 500 for the second time.

Biffle had his highest finish of the year after struggling to crack the top 10 all season. He said he tracked down Edwards despite his crew telling him to save fuel.

"I got pretty close to him with two to go, but then the fuel light came on that the pressure was low," Biffle said.

Earnhardt gambled on fuel again, as he had here in 2011, when he famously ran out of gas on the final lap and Kevin Harvick passed him for the win.

"I was hoping the guys in front of me would run out of gas," Earnhardt said. "We tried to go for a win. We didn't have a fast enough car, so we had to do something different. I like the gamble."

Truex, of the one-horse Furniture Row Racing operation, led the most laps with 131. He, too, got shuffled back after having to pit late.

"They gave me an awesome race car. I'm so proud of them. It hurts to come home fifth and run that hard and lead that many laps," Truex said. "But at the same time, it's pretty awesome to run like that. Sooner or later, we are going to get a little luck on our side."

Ryan Newman was sixth, followed by Brad Keselowski, Hamlin and points leader Harvick. Kurt Busch, who dominated the early part of the race with 118 laps led, ended up 10th.

Jeff Gordon had hoped for a strong showing in his final Coca-Cola 600 yet could not find a rhythm at the end of a long day that began in Indianapolis as he drove the pace car for that race.

Gordon's hopes faded quickly as he got shuffled back to 29th and never found the right groove to get back into contention. He finished 15th.

Six-time Sprint Cup champion Jimmie Johnsonis accustomed to waving his arms in celebration at 1-mile layouts -- winning three of the four previous events at that distance this season -- instead of watching the action from the pits. But the defending Coca-Cola 600 champion couldn't overcome a race car that had not handled to his liking much of the night, finishing 40th in his worst finish in 28 career starts at Charlotte.

He spun out while racing alone on Lap 90 and survived that as he slid without hitting anything. He wasn't so lucky later on, sliding near the same spot and this time striking head on with the inside pit wall. Johnson took the No. 48 car quickly to the garage for major repairs.

"I could have driven a little easier and tried not work so hard through traffic, but we said we were going to come in and swing for the fences," Johnson said. "We did, and I hit the fence."

Edwards wins Coca-Cola 600
Carl Edwards takes the lead with 21 laps to go and holds off Greg Biffle to win the Coca-Cola 600 at Charlotte Motor Speedway.