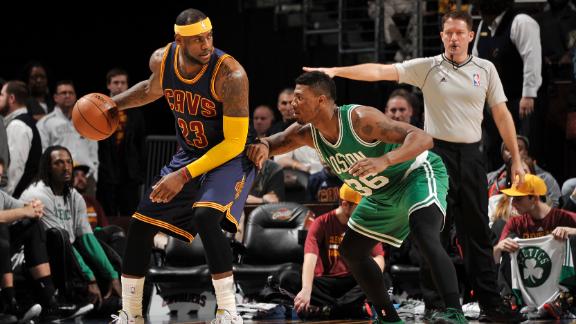 LAS VEGAS -- The Cleveland Cavaliers were considered long shots last June to win this season's NBA title. They now enter the playoffs as the favorites.

The Westgate SuperBook made the Cavaliers 9-4 favorites after Wednesday's games were completed. The Golden State Warriors are a close second at 5-2. The defending champion San Antonio Spurs, at 4-1, are the only other team with single-digit odds at the SuperBook.


The Cavs, the second seed in the Eastern Conference, were the consensus favorites in Vegas and could be found Thursday as low as even money at Caesars sportsbookto win the title. They will face the Boston Celtics in the first round with Game 1 on Sunday.


Last June, Cleveland was listed at 60-1, before buzz started building about the possible return of LeBron James. Bets on the Cavs started showing up in Vegas in early July, including a $1,000 wager at 40-1 at the MGM sportsbook. James announced he was returning to Cleveland on July 11, and Vegas books quickly anointed the Cavs as the favorites.


The Warriors, owners of the best record in the NBA and home-court advantage throughout the playoffs, opened at 20-1 last June at the SuperBook. They'll face the upstart New Orleans Pelicans in the first round, with Game 1 on Saturday. The Pelicans are 100-1 to win the title. They were 250-1 on Feb. 8, when a bettor at the William Hill sportsbook put $1,000 on New Orleans to win it all.


The Milwaukee Bucks are the biggest surprises to reach the playoffs, according to Vegas odds. The SuperBook opened the Bucks at 300-1 last summer. They are 200-1 entering the playoffs, the same odds as the Brooklyn Nets and Celtics. Milwaukee faces the Chicago Bulls in the first round. In January, William Hill took a $200 bet on the Bucks to win the title at 300-1 odds.


William Hill had the Nets at 750-1 in late March and took a $100 at those lofty odds. The Nets will face the Atlanta Hawks, the top seed in the Eastern Conference, in the first round. The Hawks are 12-1.

Cavs-Celtics preview
The "NBA Tonight" crew breaks down the first-round matchup between the Cavaliers and the Celtics.