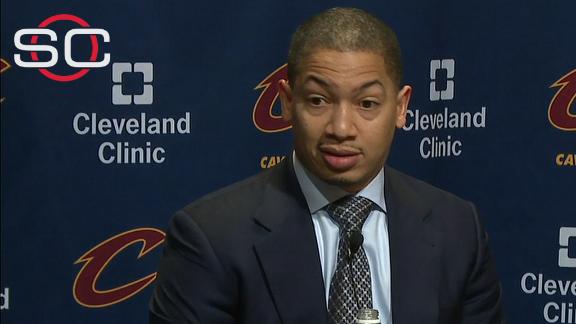 The Cleveland Cavaliers have been invigorated over the past week following game plan changes by new coach Tyronn Lue, but it hasn't been the only event that has positively affected the team.

Following a meeting called by general manager David Griffin to inform the team that coach David Blatt had been fired, Cavs players held an extended and spirited players-only meeting, sources told ESPN.com. It turned into an airing of grievances, including stars LeBron James, Kevin Love and Kyrie Irving, but eventually led to an agreement that has been a basis for the Cavs' recent strong play.

"It was like ripping off a scab," one team source said. "And it was exactly what needed to happen. I think it was what [Griffin] was hoping for."

Said another source: "It was very healthy for the team. It probably needed to happen weeks ago."

A central issue in the discussion, sources said, was the need for accountability within the team. One of the issues that was keeping the team from enjoying some of the successes of the season was the different set of rules for some players compared to others.

In what could turn out to be a key moment in their tenures together, James, Irving and Love came to an understanding that they needed to police each other on certain matters and use their influence within the team to set a standard for accountability, sources said. That was frequently a missing component over the past season and a half, sometimes creating friction.

Sources told ESPN.com's Dave McMenamin that James, Irving and Love led the conversation, owning up to personal faults and using the open forum to express what they expected out of their teammates.

"It's the type of conversation that only comes out when it's time for that conversation, if you know what I mean," a source said. The discussion got contentious at times, though sources said that it was expected.

James compared some of the Cleveland situation to his time with the Miami Heat. Other players challenged James on his need to set a stronger example, including with his effort level when he becomes frustrated, sources said.

Veteran James Jones played a key role in the gathering, both in bringing the players together and encouraging discussion, sources told McMenamin. Jones, whom players call by his nickname, "Champ," carries significant respect in the locker room.

Griffin asked Jones to organize the meeting. Players were told they were being called together to report to the Cavs' practice facility on their off day for a team matter. After Griffin addressed the team for 15 minutes and told them Lue was being promoted to head coach, the players stayed and discussed matters for around an hour. Lue did not address the team until the following morning at shootaround.

The Cavs lost their first game afterward to the Chicago Bulls, scoring just 83 points. But the mood in the locker room after the disappointing loss was more upbeat than following a quality home win over the Los Angeles Clippers 48 hours earlier.

The team has won the following four games including a 14-point win over the San Antonio Spurs on Saturday. Lue's focus on more active offense has seen the Cavs average 115 points during the winning streak.

After promising more elbow touches for Love, the forward has averaged nearly six elbow touches per game since Lue took over, an increase of 50 percent per game from his previous average, according to player tracking data on NBA.com. The new coach has also encouraged more aggressive play from Irving and altered rotations in an attempt to find space within games to feature each of the team's stars.

In both wins over the weekend, James, Irving and Love each scored more than 20 points, the first two times that that has happened this season.