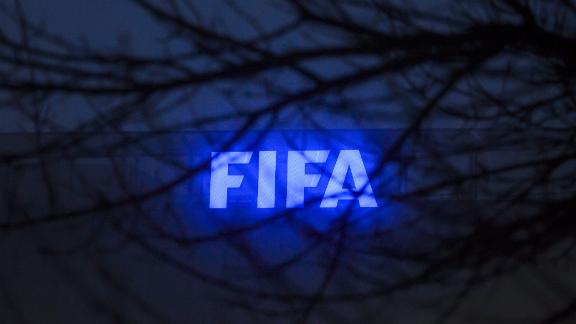 The soccer officials, including five current or former FIFA executive committee members, are being charged with racketeering and bribery in federal court in Brooklyn, New York as part of a 92-count indictment.

Lynch said the defendants acted to solicit and receive more than $200 million in bribes and kickbacks since 1991 to sell media and marketing rights. The charges primarily focus on corruption schemes involving Central and South American soccer officials, Lynch said.

"The betrayal of trust set forth here is outrageous," Lynch said in a news conference at the Justice Department in Washington, D.C. "The scale of corruption alleged herein is unconscionable."

In addition, the Justice Department announced that eight officials indicted in May had pleaded guilty to similar charges. In all, 11 current and former members of FIFA's executive committee have now been charged in the investigation.

"The message from this announcement should be clear to every culpable individual who remains in the shadows, hoping to evade our investigation: You will not wait us out. You will not escape our focus," Lynch said.

"On the instructions of the Federal Office of Justice (FOJ), a further two FIFA officials were arrested in Zurich today. They are being held in custody pending their extradition. According to the US arrest requests, they are suspected of accepting bribes of millions of dollars," the Swiss Federal Office of Justice said in a statement Thursday. "The high-ranking FIFA officials are alleged to have taken the money in return for selling marketing rights in connection with football tournaments in Latin America, as well as World Cup qualifying matches."

Some of the alleged crimes, according to Swiss officials with access to the arrest requests, were perpetrated using American banks.

Hawit, of Honduras, has been serving as the interim president of CONCACAF, the confederation governing soccer in North America, Central America and the Caribbean. From Paraguay, Napout is the president of CONMEBOL, the South American soccer confederation. Hawit and Napoutare the third past or current presidents of each continental body to be indicted by the DOJ.

U.S. Soccer distanced itself from CONCACAF and CONMEBOL alleged corruption, issuing a statement Thursday reiterating that it is committed to a transparent process for the 2016 Copa America Centenario, to be held in the United States.

Also on Thursday, FBI agents raided the Miami offices of Media World, a subsidiary of the Spanish media company Imagina, sources outside the facility told the Spanish news agency Efe. Sources close to the investigation confirmed that FBI agents entered the premises and removed boxes as well as made copies of information on computers.

On May 27, Lynch and Comey revealed an initial set of indictments targeting 14 soccer officials, many of whom held positions at FIFA, including Jeffrey Webb, Hawit's predecessor, as well as former CONMEBOL presidents Nicolas Leoz and Eugenio Figueredo. Charges of wire fraud, racketeering and money laundering stem from the sale of broadcasting rights, marketing and apparel deals, and bribes allegedly paid for votes to secure the hosting of the World Cup. The Justice Department alleges that these payments run into the hundreds of millions of dollars.

Thursday's indictments, expected for months, have far-reaching implications for FIFA, which said in a statement Thursday that it will "co-operate fully with the US investigation as permitted by Swiss law."

FIFA is in the midst of an executive committee meeting, the leadership of the beleaguered organization having assembled in Zurich to discuss governance reforms and show U.S. authorities that the organization is serious about changing and curbing wrongdoing.

"The timing of these indictments is interesting," an international investigator told ESPN. "This is the first time they've all been together since the last time [in May] they were all together."

The reform process came under attack this week, when FIFA's major sponsors -- Adidas, Anheuser-Busch, Coca-Cola, McDonald's and Visa -- lodged a joint demand for independent oversight of the organization's initiative. On Thursday, FIFA approved a series of reforms, including term limits, public disclosure of salaries and a commitment to gender diversity.

Blazer's participation, along with the IRS tracking of fraudulent payments through U.S. banks, provided the foundation for a case that has built toward FIFA's Zurich headquarters. FBI sources told ESPN that Swiss authorities took the unusual step of sharing bank records with the FBI, facilitating the Justice Department's understanding of the money flow. Now, with 34 senior soccer officials under indictment -- several of whom have pleaded guilty and are cooperating -- the case against FIFA's leadership continues to evolve.

Thursday's indictments fuel further speculation about the fate of embattled FIFA president Sepp Blatter, who has headed the organization for the past 17 years. Blatter was re-elected in the wake of May's mass arrests. He is currently under internal suspension as FIFA conducts its investigation into allegedly fraudulent payments. Blatter has said he will step down, and the organization will elect a new president Feb. 26.

At the moment, Blatter faces more serious concerns. On Sept. 25, the Swiss attorney general's office opened an investigation into Blatter, alleging mismanagement and misappropriation of funds. Swiss authorities raided his office at FIFA headquarters, confiscating documents and questioning him for several hours.

Yet Blatter has so far eluded the grasp of the U.S. government, even while some of the biggest names in international soccer administration have been unable to do so.

"It's surprising Blatter's not on [Thursday's] list," an FBI source told ESPN. "We still don't have him."

Lynch would not respond directly to Blatter's allegation that the inquiry resulted from U.S. anger at losing to Qatar when the executive committee chose the 2022 World Cup host.

"I think he's probably spending a lot of time reading through" the indictment, she said.

With Washington and Bern splitting not only the operational but also the political burden of the global FIFA investigation, sources have hinted at an agreement that places the legal destiny of Blatter, a prominent Swiss citizen, in the hands of local authorities.

Despite the FBI's investigation over more than four years, Justice Department indictments have now come in fairly rapid succession. Swiss authorities, on the other hand, appear to be taking a more deliberate approach. The Swiss attorney general's office recently announced that it would be five years before its FIFA case goes to court, if it does so at all.

"We are still a long way off from making any decision on formally charging anybody and cannot give a precise time on when this will be," Andre Marty, spokesman for the Swiss attorney general, told ESPN FC. "We are only at the stage where we are analyzing data and pursuing new lines of inquiry, particularly in relation to the 2018 and 2022 World Cups."

The Justice Department has leveled many of the FIFA-related charges under the Racketeer Influenced and Corrupt Organizations (or RICO) Act, which is generally used to target organized crime.

"We stated our determination to end these practices to root out corruption and to bring wrongdoers to justice," Lynch said. "And we pledged to work with our partners around the world to hold additional co-conspirators and corrupt individuals accountable."