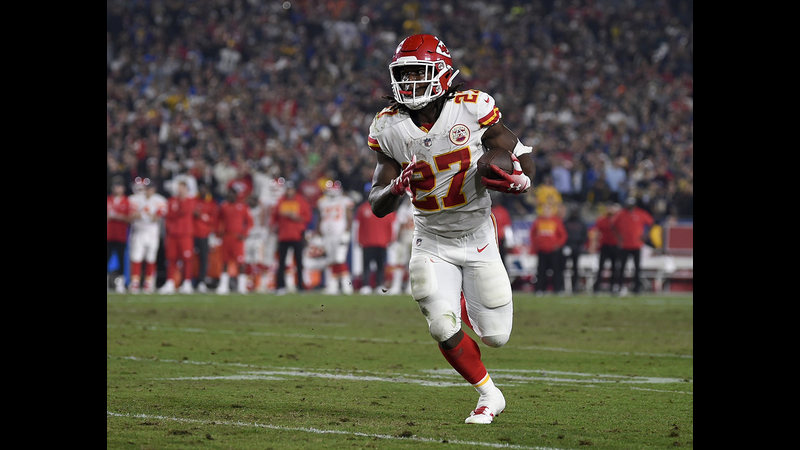 KANSAS CITY, Mo. -- The Kansas City Chiefs released running back Kareem Hunt on Friday night after video surfaced that showed the NFL's reigning rushing champion knocking over and kicking a woman in a Cleveland hotel hallway in February.

The team issued a statement shortly after the NFL had placed Hunt on its Commissioner Exemption List that said the running back lied when asked about the incident by team officials. The team said "the video today confirms that fact. We are releasing Kareem immediately."

Hunt was at the Chiefs' facility earlier Friday in preparation for Sunday's trip to Oakland, but he was excused and sent home shortly after TMZ posted the video online. It shows Hunt being restrained several times by friends before pushing a woman to the ground, where he proceeds to kick her.

Police were called to the scene during the Feb. 10 incident, no charges were filed. The police did not respond to several requests for comment Friday night.

"Earlier this year, we were made aware of an incident involving running back Kareem Hunt. At that time, the National Football League and law enforcement initiated investigations into the issue," the Chiefs said. "As part of our internal discussions with Kareem, several members of our management team spoke directly to him. Kareem was not truthful in those discussions."

Statement from the Kansas City Chiefs on Kareem Hunt

The Chiefs and the NFL have been aware of Hunt's incident since it occurred, but much like the case involving former Ravens running back Ray Rice, the shocking video brought a new dimension to the case. It showed Hunt lunging toward a woman and several others in the hotel hallway, and the second-year pro being restrained several times before knocking two people down.

While no charges were filed from the altercation, two police reports were created. Hunt is listed as the suspect in one of them and a woman, Abigail Ottinger, is the suspect in the other one.

Hunt also was involved in a June incident, according to TMZ, in which he allegedly punched a man at an Ohio resort. The man Hunt struck declined to press charges.

"I want to apologize for my actions. I deeply regret what I did," Hunt said in a statement issued to several outlets shortly after he was released. "I hope to move on from this."

When asked about the incidents in training camp, Hunt said "I've learned from it." When asked to elaborate on what he learned, he replied: "Just be in the right place at the right time."

Hunt led the NFL in rushing as a rookie with 1,327 yards and eight touchdowns in helping Kansas City make the playoffs. He had run for 824 yards this season, with seven touchdowns passing and seven more receiving, in helping the Chiefs to a 9-2 start and a stranglehold on the AFC West.

Spencer Ware is expected to take over as the lead running back.

Chiefs chairman Clark Hunt was asked several times about Hunt's incidents in the offseason, and he acknowledged that "young men are not always going to make the best decisions."

"We have a strong support system, both with the coaching staff and also our player development that works with young guys and talks to them about the situations that they want to be in," Clark Hunt said during training camp. "Obviously he had a very big year on the field last year. I'm sure he learned some lessons this offseason and hopefully won't be in those kind of situations in the future."

He won't be as a member of the Chiefs.

Domestic violence has been a major issue in the NFL in recent years, one that struck home in Kansas City in 2012 when Chiefs linebacker Jovan Belcher killed his girlfriend before killing himself at the team's practice facility. Belcher was later found to have suffered from CTE.

The most memorable incident came in 2014, when a video showed Rice knocking out his then-fiancee in an elevator in an Atlantic City hotel. Rice was originally suspended two games by NFL Commissioner Roger Goodell, who later was heavily criticized for such a light penalty after the video was released.

Rice soon after was suspended indefinitely by the league. He won an appeal but was released by the Ravens, and the three-time Pro Bowl running back never returned to the NFL.

Last year, Cowboys running back Ezekiel Elliott was suspended for six games by Goodell after the league concluded following a yearlong investigation that he had several physical confrontations in the summer of 2016 with his girlfriend at the time.

The league has implemented a stronger domestic violence policy, but incidents have continued to make news. Just last weekend, the 49ers cut linebacker Reuben Foster when he was arrested on suspicion of domestic violence - he has since signed with Washington but remains on the NFL's exempt list.

Hunt had exhibited a pattern of questionable behavior dating to his college days at Toledo, where he shattered school records but also was suspended his junior season for violating team rules.

The Chiefs chose him in the third round of last year's NFL draft, and he was poised to spend the season as the backup before Ware went down with a season-ending knee injury in the preseason. Hunt was thrust into the starting role and fumbled on his very first carry in a game in New England, but bounced back to have one of the best seasons in franchise history.

He had six games of at least 100 yards rushing and helped Kansas City win consecutive division titles for the first time, a season that ultimately landed Hunt in the Pro Bowl.

Hunt was off to another good start this season, his rushing yardage putting him fourth in the NFL and his touchdown total trailing only the Rams' Todd Gurley II and the Saints' Alvin Kamara.