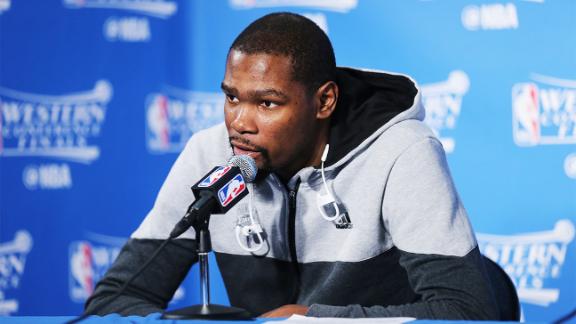 TheLos Angeles Clippers'meeting with Kevin Durant on Friday will be led by coach Doc Rivers and owner Steve Ballmer, but sources indicate that Blake Griffin, DeAndre Jordan and Chris Paul could also attend to pitch the Oklahoma City Thunder free agent on being part of a "Big Four."

The pitch will be to get Durant to join them this offseason, and Plan B would be to get him to consider joining the trio next summer if he ends up signing a one-year contract elsewhere.

The Thunder's hope, sources told Stein, is getting one last chance to pitch Durant after five other teamsmake their scheduled presentations.

Durant's first meeting Friday morning in the Hamptons on Long Island will be with the Golden State Warriors before meeting with the Clippers later in the day. On Saturday, he will meet with the San Antonio Spurs and later the Boston Celtics. He will conclude his weekend meetings Sunday with the Miami Heat.

It has been assumed that the Clippers would have to trade one of the three players in order to make room to sign Durant under the salary cap. However, sources have told ESPN that part of the Clippers' plan is to pitch Durant on playing alongside Paul, Griffin and Jordan.

The Clippers would have to renounce their rights to their free agents -- Austin Rivers, Jeff Green and Jamal Crawford -- and find a trade for JJ Redick.Durant would have to be willing to accept slightly less than a maximum salary this year.

To demonstrate their commitment to keeping Griffin, Jordan and Paul, sources said the Clippers invited all three players to attend their meeting with Durant. It's an important affirmation of Doc Rivers' previous statements about keeping the team's core together.

Jordan was training at the Clippers' facility Thursday and didn't comment on recruiting Durant, but multiple team sources said there is a distinct possibility Paul, Griffin and Jordan could be at the meeting on Friday.

The players' presence would likely hinge on Paul's availability, as he is returning from a family vacation.