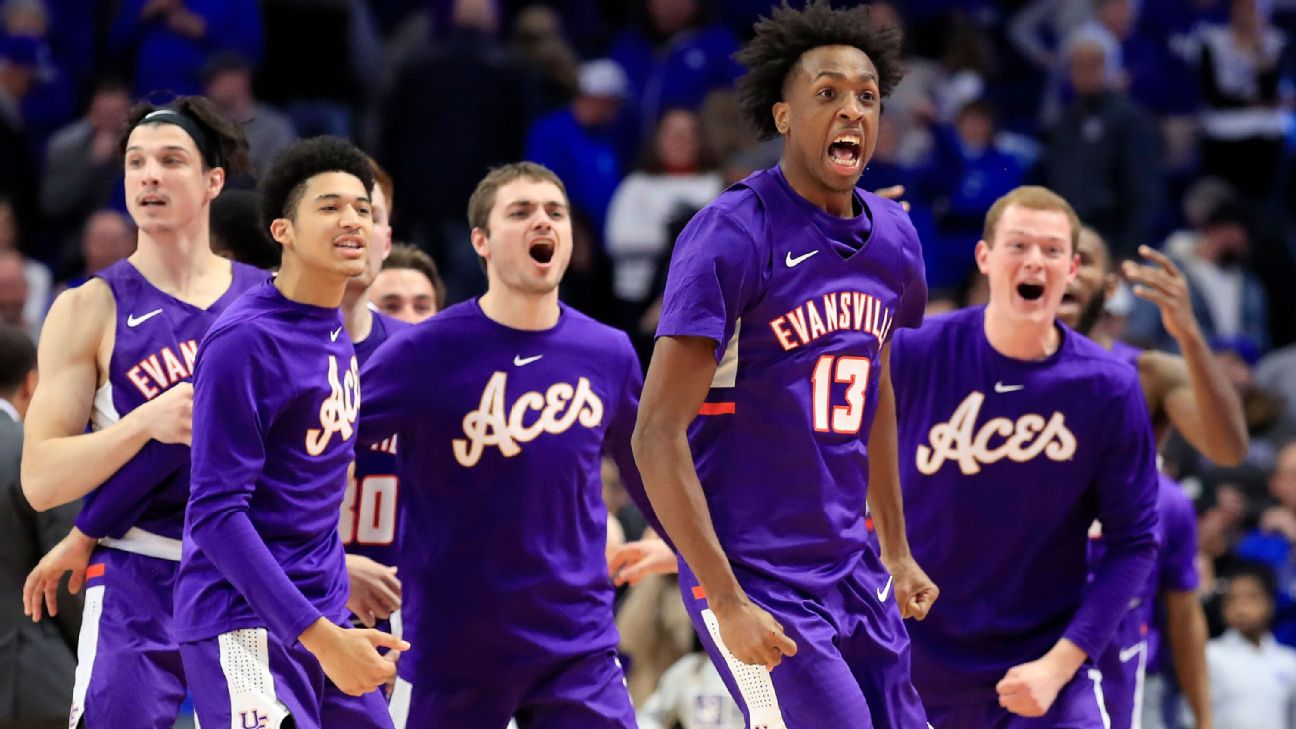 Kentucky's loss to Evansville on Tuesday night stands as the most shocking moment of the young 2019-20 season to date. In a season in which pinpointing a true standout team could prove difficult, ESPN.com's college basketball experts identified which other heavyweights could be susceptible to a similar upset, and also made their selections for this weekend's biggest contests.

Jump to score predictions for the weekend's top games

First let's wrap up the story of the week in college basketball (with apologies to James Wiseman). What are we going to be saying about Kentucky's loss to Evansville when the calendar flips to 2020?

Myron Medcalf, senior college basketball writer:I think we're going to say that Evansville turned the corner and entered Missouri Valley Conference play as a conference title threat while acknowledging that John Calipari doesn't have one of his great Kentucky teams.

There are tiers under Calipari in Lexington. We often use "one-and-done" as a blanket assessment of his talent, and that's not wise. Calipari's 2009-10, 2011-12 and 2014-15 teams were superior to the rest. This has been one of America's best offensive rebounding teams. But the Wildcats were bullied by a smaller team when they played the Purple Aces. Barring a dramatic change, nothing about a trip to the second weekend seems like a guarantee for Kentucky. But I hope we're still talking about Evansville and Walter McCarty. Because what they did is more important than what Kentucky failed to do. This is their story.

Jeff Borzello, college basketball insider:Well, we're very likely going to be talking about Kentucky losing more so than Evansville winning, and for the Wildcats, I think we'll probably see it as more of a blip than the first of several losses.

I do think Kentucky could lose to Ohio State or Louisville, but I don't think the Wildcats will lose both. John Calipari generally gets his teams playing better in February than in November, and I think he's still trying to find his best group -- and his healthiest group. I also don't think Kentucky will go to Nick Richards in the post next time it's in a must-score situation.

As for Evansville, this is a team we could be talking about as a legitimate Missouri Valley contender. The league was fairly wide open entering the season, and the favorite -- Missouri State -- already lost at home to Little Rock. Outside of next Monday's game against SMU, the Purple Aces might be favored in every single game until 2020 ... until their trip on New Year's Eve to Missouri State. That game will undoubtedly determine how we discuss Evansville's NCAA tournament hopes entering the new year.

John Gasaway, college basketball writer:We are going to be saying that UK, and more specifically the Wildcats' offense, can't just show up and expect to win. Give full credit to the Purple Aces (and toK.J. Rileyfor a game-high 18 points). They got the job done.

I wondered in the preseason about Kentucky's perimeter shooting, and, fine, John Calipari's guys were just 4-of-17 from out there in this game. But the really impressive thing to me about Evansville is that the Aces owned their defensive glass. Did not see that coming, at all. Evansville has been a great stylistic story the past couple of years, as a program that adamantly refused to shoot 3s for years is now attempting a normal number of them. The Aces hit nine treys in Rupp on no less than 30 attempts. It's a new day under Walter McCarty.

Jordan Schultz, insider/analyst:I was optimistic about Evansville before the season, and it looks as if the Aces will contend in the always feisty MVC. But to beat Kentucky at Rupp is a shock. Then again, I'm not sure it wasn't a good thing for John Calipari's young roster.

You're bound for a letdown after beating the preseason favorite, Michigan State, at Madison Square Garden. Make no mistake, Kentucky probably has the most athletic and explosive personnel in America. The good news for Big Blue Nation? Calipari will use this loss all season as a motivating factor, and his players will grow from it as a result. Clean up the turnovers, find more transition 3s and hit the glass hard every night. (You can't get outrebounded by Evansville and expect to have success in the SEC.)

You have an Evansville-over-Kentucky style upset candidate to nominate over the rest of the nonconference schedule in college basketball?

No, the Golden Bears aren't a scrappy mid-major like Evansville, but we're still speaking of a program that has gone 5-31 in Pac-12 play the past two seasons. Now, Mark Fox is at the helm in Berkeley, and the Bears are coming off a respectable overtime win at home over UNLV. Matt Bradleyisa promising sophomore, meaning he already has more Division I minutes under his belt than a healthy share of the Blue Devils' rotation players. Anyway, the request was for a huge long shot, so here you go. Maybe, just maybe, The Bench will be celebrating in Sproul Plaza come Thursday night.

Medcalf:Give me Wofford over North Carolina or Duke. The Terriers will face UNC on Dec. 15 and Duke on Dec. 19, both on the road. First-year coach Jay McAuley's squad lost Fletcher Magee and Cameron Jackson from last season's 30-win team. But Storm Murphy and Nathan Hoover are both averaging more than 17 points. And the team itself has made nearly 42% of its 3-point attempts. Seems unlikely. But if a team picked to finish eighth in the Missouri Valley Conference can shoot 38% from the field and still beat No. 1 Kentucky on the road, then anything seems possible, especially in a season without any great teams.

Schultz:Circle Sunday on the calendar: Keep an eye on New Mexico State and Arizona (at McKale Center), and really lock in on Seton Hall heading to rowdy Chaifetz Arena to play Saint Louis the same day. This might be the Billikens' best team since the Rick Majerus years, in large part because of junior guard Jordan Goodwin, who's averaging 16 points on over 51% shooting and 43% from 3. Goodwin is flanked by 6-foot-7 245-pounder Hasahn French (over 15 PPG and 7 RPG in just 24 minutes), an absolute tank who can stress any defense with his physicality and improved skill work.

Borzello:Seems impossible, but if I wanted to go out on the craziest of limbs, I think Winthrop might be able to give Duke a run -- or at least keep it within 20. The Eagles already beat Saint Mary's on the road and hung with Fresno State on the road. Neither of those places is Cameron Indoor Stadium, and Winthrop isn't even expected to win the Big South. But an Evansville-over-Kentucky upset has to essentially be a non-mid-major-favorite over a top-5 team on the road, and I think Winthrop over Duke has the most potential of the bunch.

Medcalf:The thing to remember about the Associated Press poll (I'm a former voter) is that a lot of voters are just watching the results and not necessarily paying attention to actual games outside their respective regions. That's why I expect No. 8 Gonzaga to still be in the top 10 in March. Even if the Bulldogs lose at Arizona and/or against North Carolina in December, I think they'll rattle off enough West Coast Conference wins to continue to climb as the chaos continues among the Power 5 schools.

I'll pick Villanova to be the team that's not in the top 10 come March, but not because of Wednesday's lopsided loss at Ohio State. I just think the Big East is a strong league. There are many opportunities to climb the rankings but a bunch of ways to fall too.

Schultz:Louisville is the real deal. Jordan Nwora is a bona fide Wooden Award candidate and likely NBA lottery pick. He can really score from the perimeter and excels in the open floor, as a playmaker or as a scorer. Center Steven Enoch is a horse. He looks much better than he did last season and appears to be the double-double threat most contenders need. The Cardinals have a good enough backcourt, enough athletes and a terrific coach in Chris Mack. This has all the makings of a Final Four team.

I wasn't sold on Villanova entering the season, and after seeing the Wildcats get trounced by Ohio State (the Buckeyes are really good, by the way), this feels like a 5-6 seed -- perhaps a second weekend team in March. It's not that Nova doesn't have good players -- Collin Gillespie, Jermaine Samuels and Jeremiah Robinson-Earl are all solid -- but this roster lacks the degree of high-level talent coach Jay Wright has enjoyed over his dominant run of late.

Gasaway:I'm most confident Michigan State will still be there, and I'm basing my belief on not terribly esoteric reasons. The Spartans finished in the top 10 of the AP poll last season, and many of those same players are back. No other current top-10 team -- I'm thinking here of rosters such as those of Duke, Kentucky, Gonzaga, North Carolina and Virginia -- can make that "many of the same guys are back" claim to the same extent.

Borzello:Like everyone else, I'm least optimistic about Villanova still being a top-10 team. The Wildcats had issues entering the season, and they were on full display in the blowout loss to Ohio State. Moreover, the Big East might have seven NCAA tournament teams -- a non-dominant Villanova team could easily see itself losing six games in league play. That's not the profile of a top-10 team.

Meanwhile, I'm most confident about Michigan State. The Spartans dropped their opener against Kentucky and Seton Hall took them to the wire Thursday night, but I don't think that's a harbinger of things to come. They're a veteran team with one of the best coaches in the country, and the Big Ten isn't elite at the top aside from Maryland and Ohio State. Cassius Winston, Xavier Tillman and Tom Izzo will make sure this team stays in the top 10.

(Lines, when available, fromCaesars Sportsbook. Predictors do not have access to lines when making score predictions.) 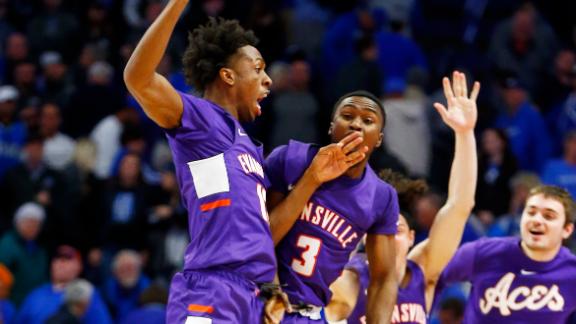