Could Kyle Allen be Carolina's Dak Prescott? Why he's the ultimate bargain 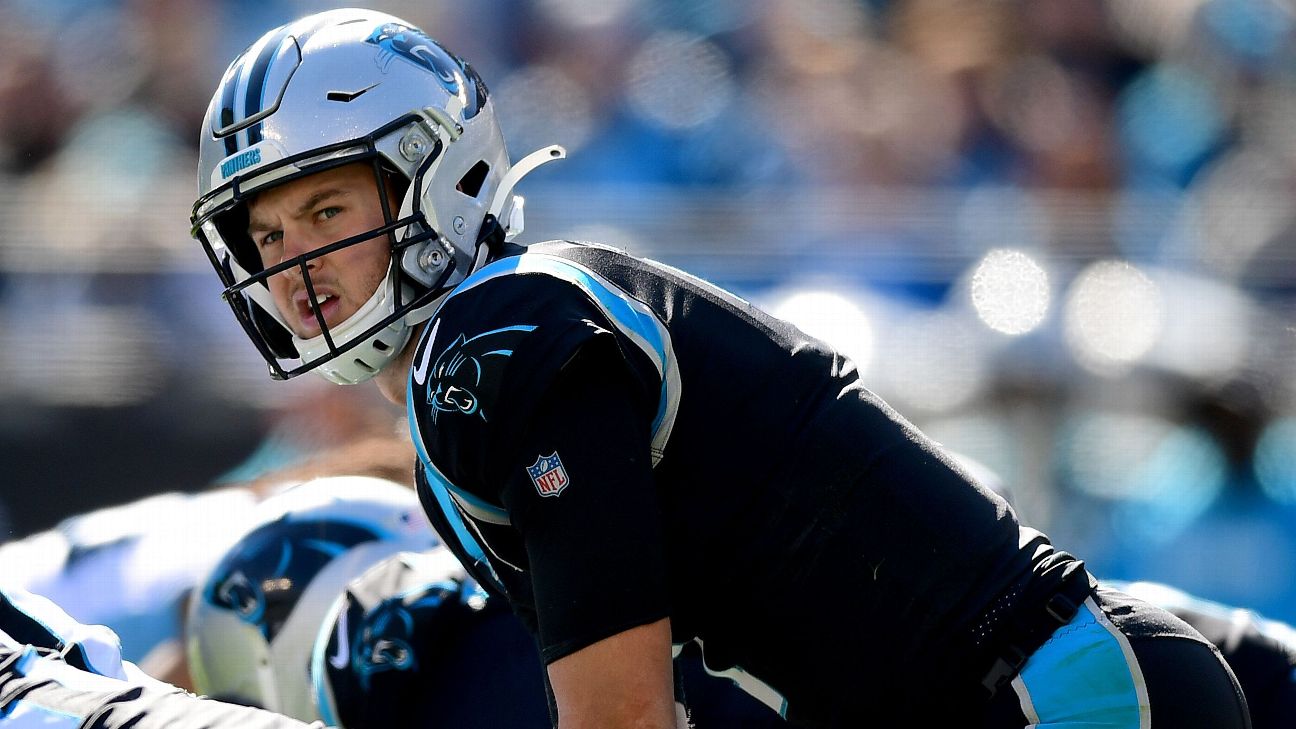 Kyle Allen has not, historically, been the guy who gets the job.

Sure, five years ago he was a red-hot quarterback recruit out of Scottsdale, Arizona, who signed to play at Texas A&M and looked to have it all set up in front of him. But from that point, it has not been the smoothest of rides. Let's recap:

Allen lost a competition for the Aggies' starting job to Kenny Hill at the start of 2014, got the job back later that season, opened the 2015 season as the starter but lost the job to Kyler Murray, transferred to Houston, sat out 2016, opened the 2017 season as Houston's starter, lost the job to Kyle Postma, went undrafted in 2018 and got cut from two different practice squads -- the Panthers' and the Jets' -- before landing back on the Panthers' practice squad a little over one year ago.

This time he stuck. Allen was elevated to Carolina's active roster last December and started the Panthers' final game of the season. He played well enough to return this season as Cam Newton's backup and assumed the role of starting quarterback in Week 3 after Newton reinjured his foot. This week, the Panthers put Newton on injured reserve, which means, at long last ... Allen has the job.

"I told him after the Arizona game [in which Allen threw four touchdown passes to lead the Panthers to their first win of the season], 'I'm glad I was smart enough to re-sign you after I was stupid enough to cut you off the practice squad,'" Panthers general manager Marty Hurney said.

The 5-3 Panthers are trusting Allen with a lot of responsibility the rest of the season. They believe they can be a playoff team. And while, yes, the main keys to their success will be their defense and their Christian McCaffrey-based running game, they need only cast their eyes to Chicago to be reminded that poor quarterback play can sink an otherwise solid roster. Allen might not need to be Patrick Mahomes, but the Panthers need him to be much more Jacoby Brissett than Mitchell Trubisky.

If he pulls this off -- if Allen establishes himself as a viable and successful NFL starting quarterback -- that's huge for Carolina not just this year but next year and in the years to come. The Panthers can release Newton in 2020, eat only $2 million in dead money and save $19.1 million against next year's salary cap. That money can be put to good use as part of McCaffrey's inevitable mega-extension as well as other deals the Panthers have coming up for guys such as linebacker Shaq Thompson and cornerback James Bradberry.

Now, financially, Allen is most definitely not Brissett, who got the Colts' starting job after Andrew Luck retired and received a sparkly new contract because he was a season away from unrestricted free agency. He's closer to being Dak Prescott, the fourth-round pick who got the job as a rookie because of a Tony Romo injury. But the undrafted, twice-cut Allen -- who is at least three seasons away from unrestricted free agency -- is in a far different category than either of those guys. As it pertains to the NFL's economic system, the category in which Allen finds himself could be labeled "Out of luck."

Allen's contract expires at the end of the year, but that won't put him in position to hit the market and score big in free agency, no matter how he plays over the next couple of months. Players whose contracts have expired but have not yet reached three years of service time are, under NFL rules, "exclusive rights free agents." This is a misleading term, because they are not free agents in any meaningful way. The team has the right to tender an exclusive free agent at a very low number -- often the league minimum -- and the player then either has to accept that offer or sit out the season. He is in no way "free" to sign with any team if his current team still wants him.

So unless the Panthers hypothetically just decided to do the right thing and pay Allen like a starter, he could start all of their games for the next three years and earn less than $7 million total. Then and only then, in time for the 2023 season, would he be eligible for unrestricted free agency.

Now, if the Panthers decide, at the end of this season, that they're moving on from Newton and Allen will be their starter moving forward, they could offer him a three-year, $7 million deal, guarantee a portion of it and pack it with incentives that pay out if he starts and wins and has success throughout the deal. But they are in the driver's seat here, and they also have third-round rookie Will Grier as a possible option if Allen flops.

If Carolina makes the difficult decision to move on from its franchise icon quarterback in the offseason, part of the upside could be the ability to move forward with a significant cost-control advantage over the rest of the league at the most important position.

Some other thoughts from around the league this week:

A word on Cam Newton

A lot of people have had a lot of negative things to say about Newton since before he was even drafted. He has contributed to some of it with his own mistakes and missteps, no doubt. Please do not think I'm here to defend things like "It's funny to hear a female talk about routes."
But Newton also has been the subject of a mountain of unfair and unsubstantiated criticism on other matters. In 2011, around the draft, there was a debate about the sincerity of the young man's smile. Come on.

Personally, I've loved watching him play and sincerely hope we all get to see it again -- whether in Carolina or elsewhere. This is a completely unique player in NFL history who started setting records in his rookie year and, I firmly believe, is three or four more years' worth of high-level production away from a legitimate Hall of Fame case. I wish he were more open and accessible because (a) I want to know more about him, and (b) I think it would broaden the deserved appreciation of him. But he is who he is, and the brilliance of who he has been as a player shouldn't be lost in the injury cloud under which his 2019 season never got going.

The I-told-you-so-ers who revel in believing they were right that the way he played would cut his career short are missing the point. Even if he never plays again, this is a tell-your-grandkids-about-him player.

A year ago, right before the trade deadline, the Cowboys traded a first-round pick to the Raiders for wide receiver Amari Cooper. This trade revitalized the Dallas offense and propelled the team to an NFC East title. The Cowboys were 3-4 when they made the deal and ended the season 10-6. The Cooper deal was ballyhooed, picked apart, criticized and analyzed at the time because it was the Cowboys and everything they do is.

This season, the Cowboys were 4-3 at the deadline and made only one move -- a 2021 seventh-round pick (that could turn into a sixth-round pick) to the Patriots for defensive end Michael Bennett. This trade was far less ballyhooed, picked apart, criticized and analyzed because they basically gave up nothing and we haven't thought much about Bennett in a while. He didn't make much of an impact in New England.

But he made a heck of an impact Monday night in his first game as a Cowboy. Bennett took apart the (admittedly overmatched) Giants, rebounding from an early offside penalty to record a sack, a couple of tackles for loss and a whole bunch of general disruption behind the Giants' offensive line. He did a lot of his damage as an interior pass-rusher, demonstrating the kind of versatility the Cowboys believe will help free up DeMarcus Lawrence and Robert Quinn on the outside.

Ahead of the deadline, Cowboys decision-makers were concerned that their pass rush hadn't been as consistently good as they'd expected it to be. New England was giving away Bennett, so they took a shot. If his Dallas debut was any indication, he has a chance to pay off in a big way.

Think again. One of the many quirky, surprising things I learned about the Giants in the time I spent covering them was how much it means to ownership to beat the Jets. I swear, I had members of the coaching staff tell me ownership was more keyed up during Jets weeks than in the time leading up to big division games against the Cowboys or Eagles. The only time I remember owner John Mara addressing the media after a game was when the Giants beat the Jets on Christmas Eve 2011. It's a rivalry that goes beyond the field, and it matters to these guys on non-football levels.

The Giants enter Sunday's game with a 2-7 record and a five-game losing streak. The Jets are 1-7 and have lost their past three. The two New York teams have been outscored by a combined total of 194 points this season. This is not a game, ladies and gentlemen, with postseason implications. But I promise you it matters to the people who own the teams -- especially to the ones who own the Giants.

I absolutely do not think the Giants will make a move with coach Pat Shurmur in season, if they do at all. But a loss this weekend would not help his case in January if ownership is trying to decide whether he's the right man for the job. And defensive coordinator James Bettcher might not be on the most solid ground, since I've been told by several people that the Giants expected their defense to be better than it has been this season (though I still don't know why they thought that). I'm not saying, but I'm just saying: Don't think this is a meaningless game Sunday in East Rutherford. There's a ton of pressure on the Giants to win. 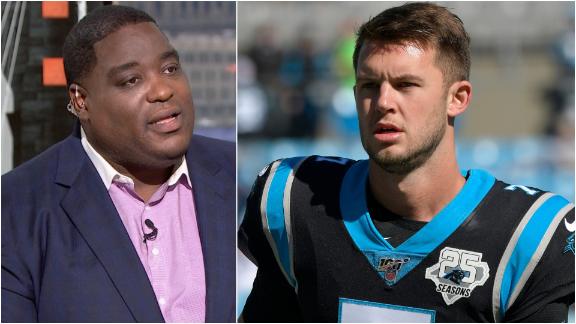 Woody: Defenses more scared of Kyle Allen than Cam Newton
Damien Woody explains why the Panthers should consider trading Cam Newton and turning it over to Kyle Allen. 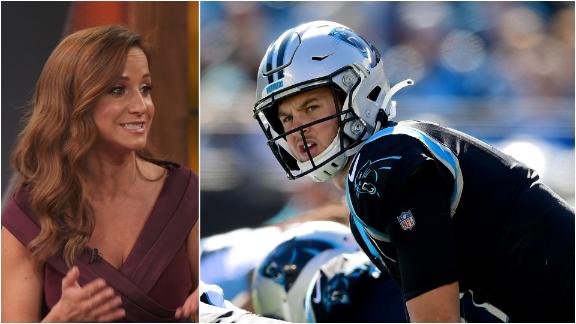 Russini: Panthers can get behind Allen with Cam on IR
Dianna Russini says that Cam Newton being placed on injured reserve gives the Panthers players an opportunity to get behind backup Kyle Allen. 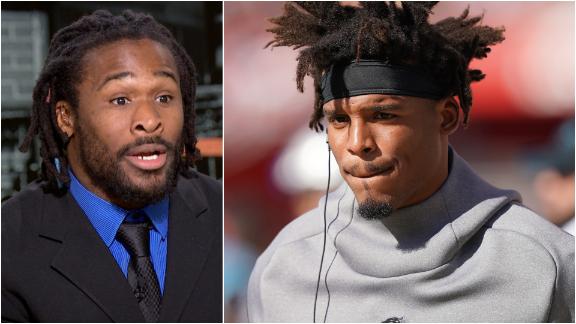