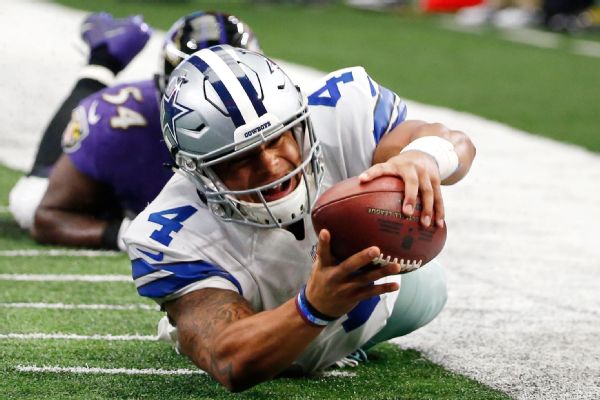 FRISCO, Texas -- Proof that every move the Dallas Cowboys' starting quarterback makes is noteworthy: Video of Dak Prescott picking up a Gatorade cup after missing the trash can has been viewed more than 49,000 times on YouTube.

To recap: Last Sunday, after the Cowboys took a 27-17 lead against the Baltimore Ravens late in the fourth quarter, Prescott flipped the cup behind him, noticed he missed, got off the bench and then threw the cup away.

It was about the only miss Prescott had in the second half.

"I don't shoot behind my back too much," Prescott said. "I think the garbage can was kind of behind me. It was a little flip-back. It still had some ice in it, so it threw off the rotation."

Prescott could have let the cup stay on the ground and few people would have noticed. Now he is being praised -- although the folks from the "Don't Mess With Texas" litter campaign have yet to reach out to Prescott.

Maybe they will now.

"Uh, more people need to pick up their trash if it was that big of a deal," Prescott said. "I just simply missed the garbage can and didn't think much of it. Get up and put my trash where it belongs."

Cowboys owner Jerry Jones certainly appreciated the move. Jones has been known to walk around AT&T Stadium or the team's headquarters, The Star, and pick up the tiniest bits of trash. He doesn't want anything to look out of sorts.

"If you go out to our stadium or you go out to The Star, if you go down on the event level or if you're in the top part with the suites in that area, you'll see no intellectual clutter and you'll see all the trash picked up. That's what we want. We're proud of it. And it's good to see that carry on through to the sidelines," Jones said Tuesday on 105.3 The Fan in Dallas.