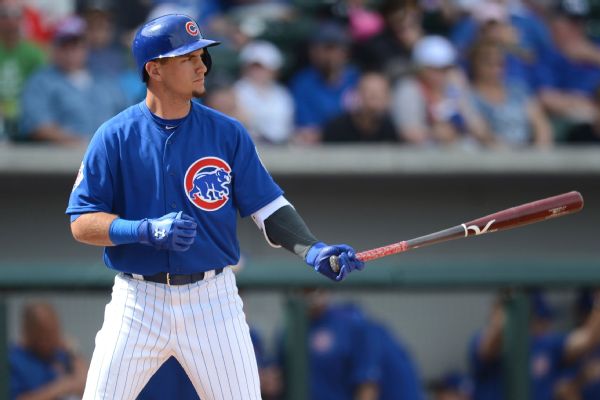 CHICAGO -- The Chicago Cubs will throw one of their youngest players into the fray against the Los Angeles Dodgers' Clayton Kershawon Saturday in Game 6 of the National League Division Series. The Cubs need only one more win to advance to their first World Series in 71 years.

Cubs manager Joe Maddon has inserted rookie Albert Almora Jr., 22, into the lineup in right field in place of veteran Jason Heyward. Almora, who bats right handed, is 0-for-6 in the postseason in limited action, primarily as a defensive replacement.

"Kershaw is pretty good," Maddon said coyly. "You look at his numbers, they're absurd against lefties. Get another right-handed bat out there, [and] the way Albert can play defense really makes it a little bit easier. Chose him over [Jorge] Soler. I think Albert is swinging the bat well. I like his defense a lot."

Almora hit .277 with three homers in 47 games during the regular season. He also wowed with highlight-reel defense.

Heyward, who signed an eight-year, $184 million free-agent deal with the Cubs last winter, has struggled at the plate all season, though his defense and base running have helped keep him in the lineup. He is just 2-for-28 in the postseason, including a 1-for-16 showing against the Dodgers. His career numbers against Kershaw are even less encouraging: 0-for-12 with seven strikeouts.

"He's struggling, obviously," Maddon said. "He keeps working. We have a lot of faith in him. If we didn't have the opportunity to do something differently tonight, I wouldn't have. But we do. Albert just presents well at the plate and well on defense to the point where I thought we need to give it a go."

Maddon suggested that Heyward might need to use the offseason to recapture his once dangerous swing. He hit .281 over the previous two seasons before sinking to .230 in 2016.

"There's going to be a lot of internal work done with him in the offseason, no question," Maddon said. "You know he's not satisfied with the year. But he keeps going out there and, again, he's a big part of our 100-plus wins this year."

The Dodgers, in search of a spark on offense, also switched up their lineup Saturday, putting rookie Andrew Toles in the leadoff spot and dropping veteran Chase Utley to the No. 8 spot.

Toles was a third-round draft pick in 2012, and hemade his major league debut on July 8, 2016. But the outfielder was sent back down at the end of July and returned Aug. 21, batting .313 with a .567 slugging percentage over his past 32 games with the Dodgers.

Aside from the Toles/Utley switch, the Dodgers mostly stuck to their lineup against right-handed pitching. Corey Seager will follow Toles, with Justin Turner batting third. Adrian Gonzalez is the Dodgers' cleanup hitter, with Josh Reddick, Joc Pederson and Yasmani Grandal to follow. Kershaw will bat after Utley in the No. 9 spot.