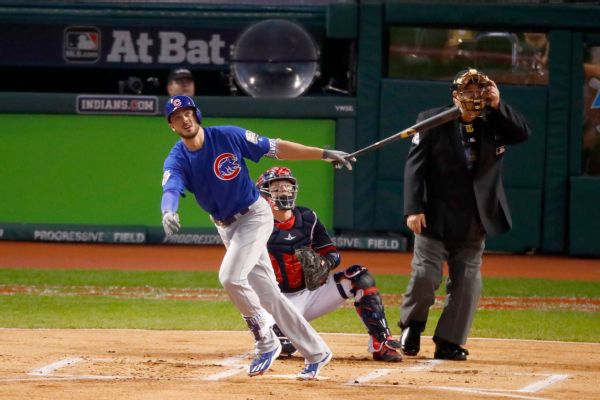 NEW YORK -- Fresh off leading the Chicago Cubs to their first World Series title in more than a century, slugger Kris Bryant and several teammates could soon be hoisting more hardware.

Bryant is among the top three vote-getters for the National League MVP award, with Cubs manager Joe Maddon and pitchers Jon Lester and Kyle Hendricks in contention for other honors.

The Baseball Writers' Association of America announced the finalists Monday. Voting was completed before the postseason, and award winners will be announced next week on MLB Network.

A season after he was the NL Rookie of the Year, Bryant hit 39 home runs with 102 RBIs while batting .292. The third baseman also scored a league-high 121 runs.

AL batting champion Jose Altuve of Houston, 2014 winner Mike Trout of the Angels and Boston outfielder Mookie Betts are the finalists in the American League. The MVPs will be announced Nov. 17.

The AL Cy Young Award is between Cleveland ace Corey Kluber, Boston's Rick Porcello and Detroit's Justin Verlander. In the NL, it's Lester, Hendricks or Washington's Max Scherzer on Nov. 16.

Detroit's Michael Fulmer, the Yankees' Gary Sanchez and Cleveland's Tyler Naquin are finalists for AL Rookie of the Year. Seager, Dodgers teammate Kenta Maeda and Washington's Trea Turner are the NL contenders, with the top rookies being announced next Monday.

Maddon, Washington's Dusty Baker, and Dave Roberts of the Dodgers are up for NL Manager of the Year. Cleveland's Terry Francona, who guided his team into the World Series, Texas' Jeff Banister and Baltimore's Buck Showalter are the AL candidates. Those honors will be awarded Nov. 15.

The Cubs led the majors with 103 wins during the regular season.