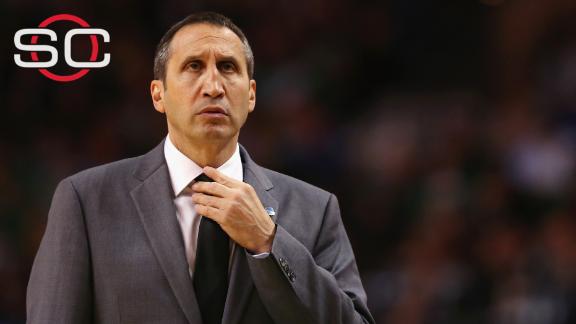 David Blatt's second NBA season seemed to be going better than his first. Now, it's over.

Blatt had guided Cleveland to the NBA Finals last year, and the Cavs had the Eastern Conference's best record (30-11) midway through this season, but in discussing the coaching change during a news conference late Friday afternoon, Griffin cited "a lack of fit with our personnel and our vision."

"What I see is that we need to build a collective spirit, a strength of spirit, a collective will," Griffin said. "Elite teams always have that, and you see it everywhere. To be truly elite, we have to buy into a set of values and principles that we believe in. That becomes our identity."

While acknowledging his 24 years spent working in the NBA in varying capacities, Griffin said of the Cavaliers: "I have never seen a locker room not be as connected after wins as they need to be. We've only been galvanized when expectations were not high."

Griffin confirmed that Lue, who was a top candidate for the job in 2014 when it went to Blatt, will not have an interim tag and will be the full-time coach. Lue agreed to a deal that will pay him $3 million prorated this season and $3 million next season, with a team option for a third year at $3.5 million with a buyout, a source told ESPN's Ramona Shelburne.

"I am more than confident that he has the pulse of our team and that he can generate the buy-in required to start to refine the habits and culture that we've yet to build," Griffin said.

Griffin did meet with Cavs owner Dan Gilbert, who supported the move to fire his third coach in four seasons.

"Over the course of my business career I have learned that sometimes the hardest thing to do is also the right thing to do," Gilbert said.

Blatt thanked the Cavaliers in a statement released by his agency earlier Friday.

"I am very grateful to have had the opportunity to serve as the Head Coach of the Cleveland Cavaliers," Blatt said in the statement. "I'd like to thank (owner) Dan Gilbert and David Griffin for giving me this opportunity and am honored to have worked with an amazing group of players from LeBron James, Kyrie Irving and Kevin Love through our entire roster. I'd also like to express my extreme gratitude to my coaching staff. I am indebted to them for their professionalism, hard work, loyalty and friendship. I am proud of what we have accomplished since I have been the Head Coach and wish the Cavaliers nothing but the best this season and beyond."

NBA coaching sources told ESPN's Marc Stein that Blatt is intent on coaching in the league again as opposed to immediately returning to the European game, where he was one of the most successful coaches in its history.

James, meanwhile, was informed of the team's decision to fire Blatt on Friday, sources told ESPN's Brian Windhorst. Although James' fondness for Lue and his desire to be coached by a former player were well-known throughout Cleveland's organization, James was not directly consulted Friday on the Cavs' decision to fire Blatt, sources said.

Griffin confirmed that the decision was his alone.

"I didn't talk to any of the players before this decision," Griffin said. "It's really critical to me for everybody to understand this is my decision. This is our basketball staff's decision. ... I'm not taking a poll."

A team source told ESPN's Dave McMenamin that Blatt's firing means "everyone is in the crosshairs right now."

A source also told McMenamin that Lue was a natural choice for the position because his influence within the Cavs was already pronounced from his assistant position. Lue was the highest-paid assistant coach in the league.

"I think it was pretty evident," the source said. "All the guys went to him for everything anyway."

A former assistant coach with the Boston Celtics and Los Angeles Clippers, Lue played 11 seasons in the NBA after being a first-round pick of the Denver Nuggets. Griffin noted the history of great coaches whom Lue played under, includingPhil Jackson, Doc Rivers, Stan Van Gundy and Jeff Van Gundy.

Rivers said he had mixed emotions about the Cavs' moves.

"Blatt's a heck of a coach and is doing a heck of a job," he said. "He had the most scrutinized job that you could possibly have. I think the reward for coaching LeBron is you get scrutinized. It really is. It's hard. You have a great record, the best in the East, and you get fired for it. Unfortunately, being in this as long as I've been in it, you see it all the time. It's happened to me. It's tough. I'm happy for Ty, but not this way. It's the life of a coach in it and the guy on the sideline like I am. It's a tough one."

The Mavericks' Rick Carlisle, president of the NBA Coaches Association, said Blatt's firing made him "embarrassed for our league."

Blatt's firing comes one day after he became defensive before a win over the Clippers. He was bothered by criticism he and the team received after their 34-point loss to the Warriors on Monday.

"I hear a lot of far-reaching conclusions, and personally, I don't like it, but there's nothing I can do about it because I'm not the one that's saying or doing those things," Blatt said. "I think this team has done pretty well dealing with the adversity that we've had. I think this team is in pretty good position, although people choose to overlook that, which I don't think is fair."

Even though Cleveland started the season without Irving and Iman Shumpert for the first two months because of injuries and hadTimofey Mozgov (knee) and James (back) at less than 100 percent coming out of training camp,Blatt's second campaign was going better than his first, when he struggled to adapt to the NBA game after his stint in Europe.

However, there was an apparent disconnect between Blatt and his players.

Sources told ESPN's Chris Broussard that many Cavs players, especially the veterans, felt that Blatt was in over his head as coach and questioned whether he knew the league well enough to lead them to a championship.

Blatt leaves the Cavaliers, his first NBA coaching job, with an 83-40 record. His .675 winning percentage was the best of any coach in franchise history. Cleveland lost to Golden State in the NBA Finals in Blatt's first season and James' return to the Cavs.

According to the Elias Sports Bureau, Blatt is the first head coach since conferences began in 1970-71 to be fired when his team has the best record in its conference. But Griffin said the move was based on "measuring more than wins and losses."

Information from ESPN's Dave McMenamin and Ian Begley and The Associated Press contributed to this report.

Why did the Cavs fire Blatt now?
ESPN NBA reporter Brian Windhorst explains the Cavaliers' decision to fire coach David Blatt and sign Tyronn Lue to a multiyear deal to replace him.

Stephen A.: There's probably more moves to come
Stephen A. Smith believes the Cavaliers' firing of coach David Blatt could be the first of several moves to mold the team into a contender against the West's elite.

What does Lue bring to the table?
Stephen A. Smith breaks down the strengths that Tyronn Lue brings to the Cavaliers, taking over a 30-11 team.