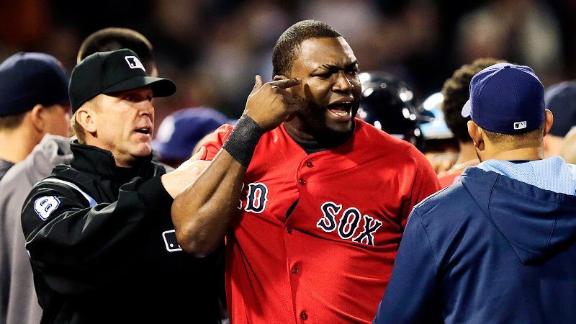 BOSTON -- David Ortiz, outraged that David Price hit him Friday night with a 94 mph fastball on the first pitch the lefty threw to the Red Sox slugger since he hit two homers off him in Game 2 of the AL Division Series last October, said he has lost all respect for the Rays ace.

"It's a war," Ortiz said after the Red Sox rallied for a 3-2, 10-inning win over Tampa Bay for their fifth straight win and second walk-off in two nights. "It's on. Next time I see him, he better put his gloves on. I have no respect for him anymore."

Price, asked after the game whether he had hit Ortiz intentionally, said: "I've got to establish my fastball in. I had six lefties in that lineup, that's my favorite side of the plate to go to. Got to establish it in."

Ortiz said he spoke with Price by phone after the playoffs last October, and thought that any lingering issues had been resolved between the two.

"I had a lot of respect for the guy, man," he said. "It is over now. I have no more respect for him. Last year, we kicked his butt in the playoffs and he went off talking crap about everyone.

"We go to talk on the phone after we kind of straightened things out. He was upset, and then I let him know how I felt. Later on he called me and apologized because he knew he was wrong. Everything was cool, so the first at-bat of the season against him, he drills me."

Ortiz had not faced Price last Saturday in Tropicana Field, when Price gave up five runs in the first inning, then shut out the Sox on one hit over the next seven innings in a game the Rays eventually rallied to win, 6-5, in 15 innings.

"I was going to let him know. I respect everyone in this league and expect the same from everyone. If you are mad because I take you deep twice, let me let you know. I've got almost 500 home runs in this league. That's part of the game, son."

In Game 2 of the ALDS last October, the Red Sox beat the Rays, 7-4. Ortiz's first home run off Price went to right-center field. His second home run was a towering drive down the right-field line, over Pesky's Pole. Ortiz lingered at home plate to determine whether the ball was fair or foul before beginning his long, satisfied stroll around the bases -- perhaps too long and too satisfied for Price's taste.

Friday night, plate umpire Dan Bellino issued warnings to both dugouts and to Price after Ortiz was hit. Manager John Farrell, enraged that Price was not ejected, was ejected for making that point to Bellino.

"David's a heckuva pitcher," Farrell said regarding Price. "He comes in with two hit batters and eight walks on the year. He's got the lowest walk rate in the American League. And when he throws a ball and hits David Ortiz in the back, there is intent to that. They can dispute that all they want. There is intent to that pitch.

"As emphatic as Dan Bellino's warning was, it sure seemed like Dan Bellino felt there was intent as well."

The fact that Bellino issued warnings after Ortiz was hit, crew chief Jeff Kellogg said, was an indication that he had judged there was intent behind Price's pitch.

"If we think that there is intent to throw at a hitter," Kellogg said, "then that's when we're going to issue warnings."

"I disagreed with it," Farrell continued. "He took the ball out of our hand, and after [Red Sox first baseman] Mike Carp got hit with a ball up around his neck and they didn't make a move, then the umpires allowed this game to escalate even further.

"When we have four people ejected and also three players hit by pitches and they have none, that's a hard one to figure out," Farrell said. "He threw at Ortiz and hit him in the back. There's intent to that."

Price was allowed to remain in the game after hitting Carp in the fourth, Kellogg said, because Bellino did not believe there was intent.

"Again, if we feel there was intent to hit the batter, he would have been ejected," Bellino said of Price after the game. "We felt the pitch was certainly inside, but not intentional, so that's why he stayed in the game."

Lovullo, who took over after Farrell was ejected, was ejected in the fourth when he complained to Bellino that Price wasn't tossed after hitting Carp, firing his cap to the ground in the process. Butterfield, placed in charge after Lovullo was run, was automatically ejected when Bellino tossed Workman.

Under Rule 8.02 of the Major League rules, umpires are given the discretion of ejecting a pitcher even before issuing warnings, if they feel the pitcher was intentionally throwing at the hitter. That was Farrell's argument, that Price should have been ejected immediately.

In the Rays clubhouse after the game, Price said he did not understand why Ortiz was so frustrated at being hit by Price's pitch. He dismissed the idea that Ortiz's pair of home runs off Price in the 2013 ALDS led to the beaning or Ortiz's ensuing anger over it.

In light of these teams' second altercation in less than a week, Price was asked if the anger would continue between the Red Sox and Rays.

Four Red Sox Tossed In Boston's Walk-Off Win
A.J. Pierzynski's triple in the bottom of the 10th lifted the Red Sox past the Rays 3-2.