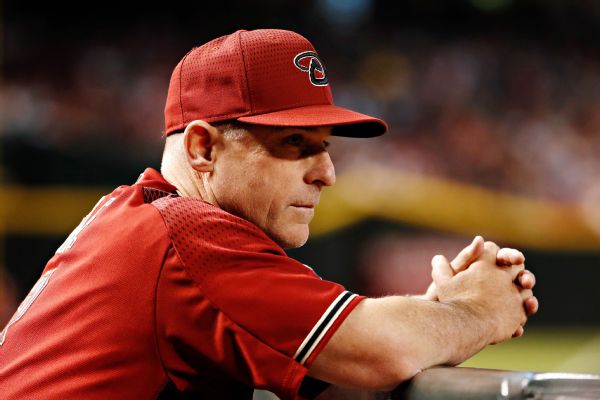 The team announced in a release on Monday that it will discuss an appropriate role for chief baseball officer Tony La Russa in the future, butmanaging general partner Ken Kendrick said La Russa will not be the manager.

"We are very grateful to Dave and Chip, who are widely respected throughout the game of baseball," Kendrick said in a statement. "Ultimately, the results have not been what we had hoped, and while that responsibility is shared by all of us, we have decided that a change is necessary."

The Diamondbacks won the World Series in 2001 and had a brief resurgence a decade later, winning the NL West. Arizona has been in a steady decline since then, posting five straight non-winning seasons.

The Diamondbacks brought in La Russa in 2014, and among his first moves, he brought in Stewart and Hale, elevating them to positions they had never held at the big league level before.

"I don't have anything bad to say about Ken Kendrick,'' Stewart told USA Today Sports. "I'm not mad at this guy. He's different. I'm different.

Instead, the Diamondbacks took a step back. They started slow and never recovered, finishing with a 69-93 record and missing the playoffs for a fifth consecutive season.

Now the franchise will be searching for a fifth GM and fifth manager since 2010.

"Stew and Chip are quality individuals who I consider friends and I respect greatly,'' Arizona CEO Derrick Hall said. "I thank them for their tireless efforts while wearing our logo on their chests. We will look to move quickly as we turn the page and begin another chapter for this proud franchise.''

A four-time 20-game winner as a player, Stewart had previously worked in the front office for Oakland, San Diego and Toronto before landing his first general manager's job.

Hale played seven major league seasons with Minnesota and the Los Angeles Dodgers before getting into coaching. He worked as Bob Melvin's bench coach for three seasons before being hired as a big league manager for the first time with Arizona. He previously worked nine seasons in Arizona's organization and spent two seasons with the New York Mets.

Arizona has made some questionable moves the past couple of seasons, including an $8.25 million contract for Cuban right-hander Yoan Lopez, who has considered leaving the game. The Diamondbacks also were criticized for the deal that brought Miller to the desert, which sent outfielder Ender Inciarte and shortstop Dansby Swanson, Arizona's top draft pick in 2015, to Atlanta. Miller struggled in his first season with Arizona, going 3-12 with a 6.15 ERA.

Arizona did pull off the most surprising offseason free-agent deal before the 2016 season, luring Greinke away from top teams that had been pursuing him. Greinke showed flashes of still being one of baseball's best pitchers, but he was inconsistent most of the season. He won a team-high 13 games but also had a 4.37 ERA, second-highest of his career.

Arizona's pitching staff struggled as a whole, finishing with a baseball-worst 5.11 ERA.