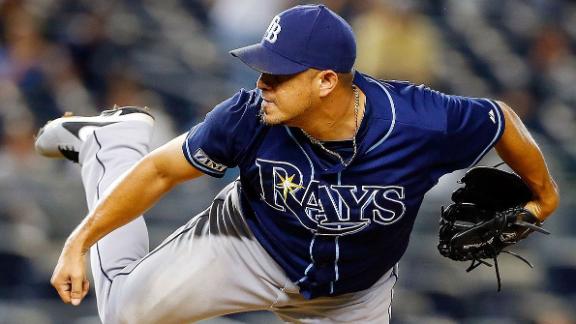 The move was the first major league trade under new Dodgers president of baseball operations Andrew Friedman, who spent 10 years in the Rays' front office.

The Rays recently picked up a $2.5 million option on Peralta for 2015.

"Joel's significance to the Rays transcended his on-field performance," Rays general manager Matt Silverman said in a statement. "He was a clubhouse leader who always sought ways to make the organization better."

Dominguez, 24, was among the hardest throwers in the Dodgers' organization. He pitched in 14 games over the past two seasons, with a 6.14 ERA.

The Dodgers invested heavily in their bullpen last winter, but it proved a disappointment in the regular season -- ranking 12th in the National League with a 3.80 ERA -- and a major liability in the playoffs.