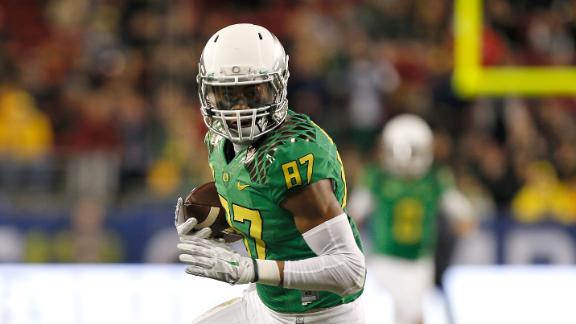 Ducks spokesman Dave Williford confirmed that Carrington did not make the trip for the championship game, but the team wouldn't address the situation until coach Mark Helfrich appears at Saturday morning's media day. The Ducks arrived in Dallas on Friday night.

Fox Sports reported that an appeal by Oregon already has been heard and denied.

The loss of Carrington, who is second on the team among wide receivers in yards, is a big blow for Oregon's high-powered offense.

Carrington had more than 100 receiving yards in each of the Ducks' past two games. He had seven catches for 126 yards with one touchdown in a 51-13 victory over then-No. 8 Arizona in the Pac-12 championship game Dec. 5 -- his first career start -- and then had seven catches for 165 yards with two touchdowns in a 59-20 win over No. 3 Florida State in the Rose Bowl Game Presented by Northwestern Mutual on New Year's Day.

The Ducks already are expected to be without freshman receiver Devon Allen, who injured his knee on the opening kickoff of the Rose Bowl. Allen is second on the team in receptions with 41 catches for 684 yards and seven touchdowns. Tight end Pharaoh Brownalso has been sidelined for several games with a leg injury.

The Ducks still have three players who have caught more than 20 passes this season: converted running back Byron Marshall(66 catches for 834 yards), sophomore Dwayne Stanford (39 for 578) and freshman Charles Nelson(21 for 101).

Information from ESPN.com's Mark Schlabach and The Associated Press was used in this report.