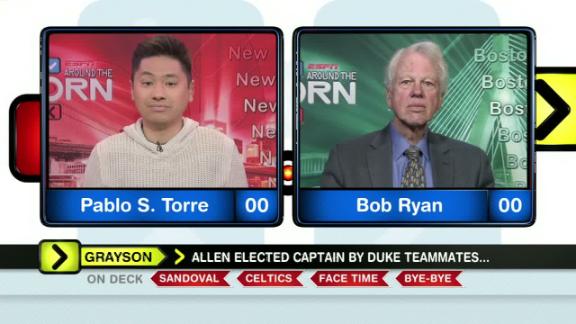 DURHAM, N.C. -- Dukesenior Grayson Allen says he is healthy -- both physically and emotionally.

Allen, who last season dealt with numerous injuries and a third tripping incident, is optimistic he will be able to control his emotions this season. However, he also understands previous transgressions may forever tarnish his reputation in the minds of many.

"Polarizing," Allen told ESPN on Tuesday about how people perceive him. "I can't really pick one because there's probably a big divide. Half of the basketball world thinks I'm this hothead, dirty player who can't get anything under control and probably thinks I'm arrogant and a selfish guy. And another group that thinks I'm a lot better than I actually am."

Allen is the lone senior on the Blue Devils this season and was named a captain by coach Mike Krzyzewski. Each of the heralded freshmen -- Marvin Bagley III, Gary Trent Jr., Trevon Duval and Wendell Carter Jr. -- all spoke glowingly to ESPN of Allen's leadership thus far.

"I had another year of growth, but I'm still growing and maturing," Allen said. "This is the time to do it, in college. This year, I think I have a lot more perspective on things. I've learned a lot from what I've gone through, but I feel so much different. Better, not only on the court, but my mentality off the court as well."

Allen said that he's optimistic that his new role as a senior leader and captain will help him focus his energy and emotion on the court. Last year's incident came against Elon on Dec. 21 and was followed by a heavily criticized one-game suspension.

"It's a change of mindset," Allen said. "I know I'm the leader this year, the only captain, the only senior on the team. Everything I do has to be focused on us and the guys that I have. Being the competitive guy that I am, I can't get into individual battles like I have. A lot of my learning with Coach has been learning to play with emotion and not just get rid of it."

Allen was considered a potential lottery pick after a sophomore season in which he averaged 21.6 points per game, but he dealt with hamstring, ankle and toe injuries early last season that hampered his play. He finished the season averaging 14.5 points and still trying to regain his love for basketball.

"I don't know if I was ever fully having fun by the end of last season," he said. "But I know I have it back now."

Allen isn't surprised that he's still in college despite multiple opportunities to leave early. Multiple NBA executives told ESPN that Allen would have likely been a first-round pick after his sophomore campaign, but his stock slipped last year and he would have likely slid into the second round if he had opted to leave school early.

"I just wanted to be here," Allen said. "I felt like I wasn't finished here. At the end of the day, it's about my happiness and I felt like I was going to be 100 percent happy here."