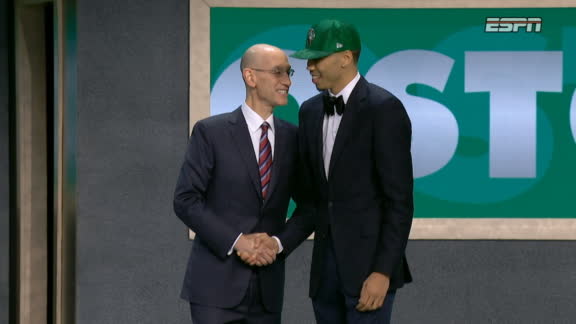 BOSTON -- The Celtics selectedJayson Tatumwith the third pick in the 2017 NBA draft Thursday night, a selection made just days after they traded out of the No. 1 spot.

His coach with the Blue Devils,Mike Krzyzewski,called him after Boston traded the No. 1 pick to Philadelphia earlier in the week, and he suggested the Celtics might be a good destination.

"[Krzyzewski] called me and talked about how Boston wanted me to come up there for a workout, and he was just ranting about how great of a person [coach] Brad Stevens is, and that Coach K would love the opportunity if they would pick me, and he really wanted me to go up there and work out for them," Tatum said. "I was all for it. It worked out. I had a great time up there on my visit and obviously they enjoyed me."

The 6-foot-8 Tatum has the scoring potential that could eventually help defray some of the scoring load from All-Star point guard Isaiah Thomas.

Celtics president of basketball operations Danny Ainge said there were as many as six players at the top of the draft that Boston considered but said Boston would have drafted Tatum even if it held onto the No. 1 overall pick.

"We liked his size and length and rebounding and shooting. [His] Intelligence [and] character," Ainge said. "There's a lot to like about Jayson; he's going to be a terrific player."

After the Sixers deal, Ainge said he believed the team could get the player it would have selected with the top pick at No. 3. That quote was relayed to Tatum on Thursday night during his meeting with reporters at the Barclays Center.

"That's a great compliment, especially with all the great guys in this class," Tatum said. "The two guys that went ahead of me, they're great players. But I'm glad at how it worked out, so I'm happy."

Tatum might be known for his offensive talents, but he said that during his meeting with Stevens, they talked a lot about his defensive versatility.

"[Stevens] just said guys that are my size and are versatile, offensively and defensively, it's hard not to play those guys," Tatum said earlier this week. "That's what we talked about. If you can defend 1 through 4, if you can knock down shots, and then, if you can score, that's a bonus."

Tatum has compared his game, at times, to Paul Pierce, which should endear him quickly to Boston fans. Asked for a current NBA comparison, Tatum picked a player whom the Celtics had interest in at February's trade deadline.

"My favorite player right now would be Paul George," Tatum said. "That's somebody I look up to and that I enjoy watching play."

Early on, Tatum will be deep on the Boston depth chart behind Jae Crowder and last year's No. 3 pick, Jaylen Brown, but his scoring ability will give him a chance to carve out a role early in his NBA career.

Tatum said he was eager to dive in with a team that won an East-best 53 games last season and advanced to the conference finals.

"It's great. I think that I get to learn that much more, especially from a veteran team that knows what it takes to get there," Tatum said. "I can't wait to go and learn from Coach Stevens and Isaiah Thomas and just everybody on that roster."

"We were very excited that he was still there," Ainge said. "We're big fans. He's a great kid, has a great work ethic. Again, very high character. He can shoot and we needed a guy like him. Sometimes, when we didn't have a guy like Jae Crowder, it got thin at both positions and it gives us more depth and a 245-pound body that can make 3s."