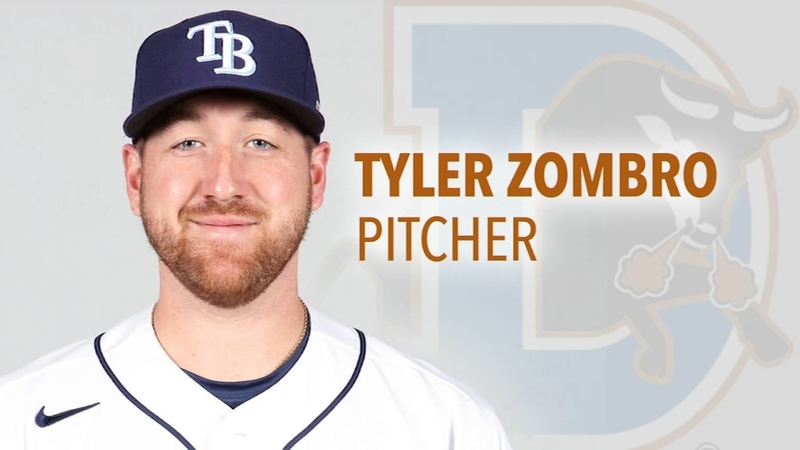 DURHAM, N.C. -- Durham Bulls pitcher Tyler Zombro remains hospitalized after being hit by a batted ball during a home game against the Norfolk Tides.

The Tampa Bay Rays on Friday said he was 'stable.'

Zombro, a right handed pitcher in the Tampa Bay Rays organization, was hit by a sharp line drive from Norfolk's Brett Cumberland in the eighth inning. Zombro crumbled awkwardly to the ground, lay motionless for a moment face down, then began to convulse uncontrollably as teammates and a trainer rushed toward the mound.

"As of this morning, Tyler remains under the care of the nurses and doctors at Duke University Hospital," the Rays said in a statement on Friday. "The updates from overnight have been positive, and he remains in stable condition. We are overwhelmed by the support for Tyler and the wishes for his full and speedy recovery from fans and the baseball community alike. We will provide additional updates as he progresses."

Tonight’s game has been suspended in the 8th inning after Bulls pitcher Tyler Zombro was hit by a batted ball.

Cumberland took a knee near first base while Zombro was tended to, and other players did the same across the field, many of them praying.

The game was suspended after the incident.

Dr. Kevin Carneiro is a head injury expert at UNC.

He said he wouldn't be surprised if the hit creates more debate about additional protective gear for players, especially pitchers.

And he said it should also be a reminder to parents whose children are athletes.

"Sometimes athletes get a hit like this or some other hits and initially they look okay, they have this lucid period where they're looking fine," he said. "But they can go downhill many hours after that."

The 26-year-old Zombro signed as a minor league free agent with Tampa Bay in 2017 after going undrafted out of George Mason. He was appearing in his ninth game this season with the Bulls, entering the night 1-1 with a 3.18 ERA.