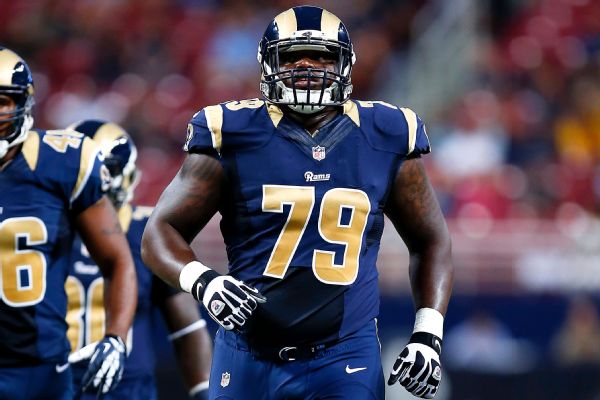 NEW ORLEANS -- Greg Robinson, a former No. 2 overall pick, was benched for the Los Angeles Rams'49-21 loss to the New Orleans Saints on Sunday, but that won't be the case for long.

Rams coach Jeff Fisher said he merely wanted to give the offensive lineman "a break, a week off, because he needed it. ... I expect Greg will return back to the lineup."

He may have to, anyway.

If Saffold misses time, Robinson will return to left tackle and Brown will remain at left guard, with Tim Barnes at center, Cody Wichmann at right guard and Rob Havenstein at right tackle.

With Saffold out in the second half, and Robinson a healthy scratch from the game, the Rams were forced to plug the offensive line's most crucial spot with Andrew Donnal, a second-year player who said this might have been his first game at left tackle since high school.

Donnal said he "kind of felt like a fish out of water," which is something Robinson can relate to.

Robinson has been plagued by inconsistent play and head-scratching penalties ever since the Rams took him high in the draft out of Auburn in 2014.

His 28 total penalties over the last two years -- the last of which was an inexplicable block on a first-down scramble by Jared Goff last week -- are four more than anybody else in the NFL. Robinson has allowed 21 quarterback hurries this season, already equaling his amount from all of last season, according to Pro Football Focus. And this season, that subscription-analytics service ranks him 75th among 80 tackles.

"Recently, it's just a matter of his technique," longtime offensive line coach Paul Boudreau said of Robinson earlier this week. "He's all over the place with his feet; he's all over the place with his hands. And when he gets in trouble, when he stops his feet, he grabs, and he gets those holding penalties that you really don't need. So he's got to concentrate on focusing on the little things."

The Rams didn't make Robinson available postgame because he was not active.