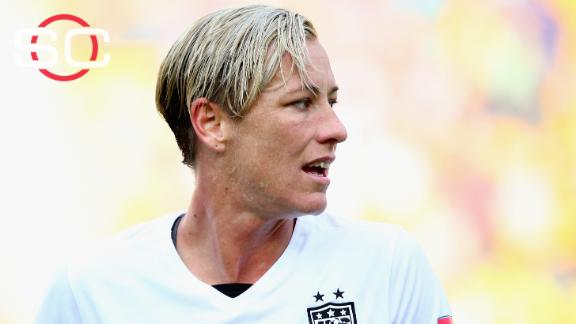 OTTAWA, Ontario -- FIFA has issued a warning to U.S. forward Abby Wambach for comments she made about the officiating in a match against Colombia at the Women's World Cup.

During the match Monday in the knockout round, U.S. midfielders Megan Rapinoe and Lauren Holiday were issued yellow cards. Because both had yellows from previous matches at the tournament, both will have to sit out Friday night's quarterfinal match against China.

Wambach was asked whether the yellow cards were deserved.

"I don't know if they were yellows," she said. "It seemed like she (the referee) was purposefully giving those yellows to maybe players that she knew were sitting on yellows. I don't know if that was just a psychological thing, who knows. Who knows?"

The comments concerning French referee Stephanie Frappart might have merited discipline by FIFA, soccer's international governing body. Canadian striker Christine Sinclair made comments about the officiating following her team's loss to the United States at the London Olympics, and she was later suspended for four matches for unsportsmanlike behavior.

Wambach apologized the next day, calling it wrong to suggest what the official was thinking.

"I'm not in the referee's head, and that's something I definitely take ownership of and apologize for," she said.

FIFA said in a statement Thursday night that the apology factored into the decision.

"The chairman of the FIFA Disciplinary Committee took into consideration all the circumstances of the case, including the fact that Abby Wambach took full ownership and apologized for her comments in a timely manner," the statement said.

FIFA said it informed Wambach of the decision earlier in the day. The warning cited article 57 of FIFA's disciplinary code, which concerns sportsmanlike conduct.

U.S. defender Meghan Klingenberg said she had no issue with what Wambach initially said.

"Quite frankly, that's Abby just having our teammates' backs," she said. "She wants them to play. I see no problem with that. And we're moving forward."