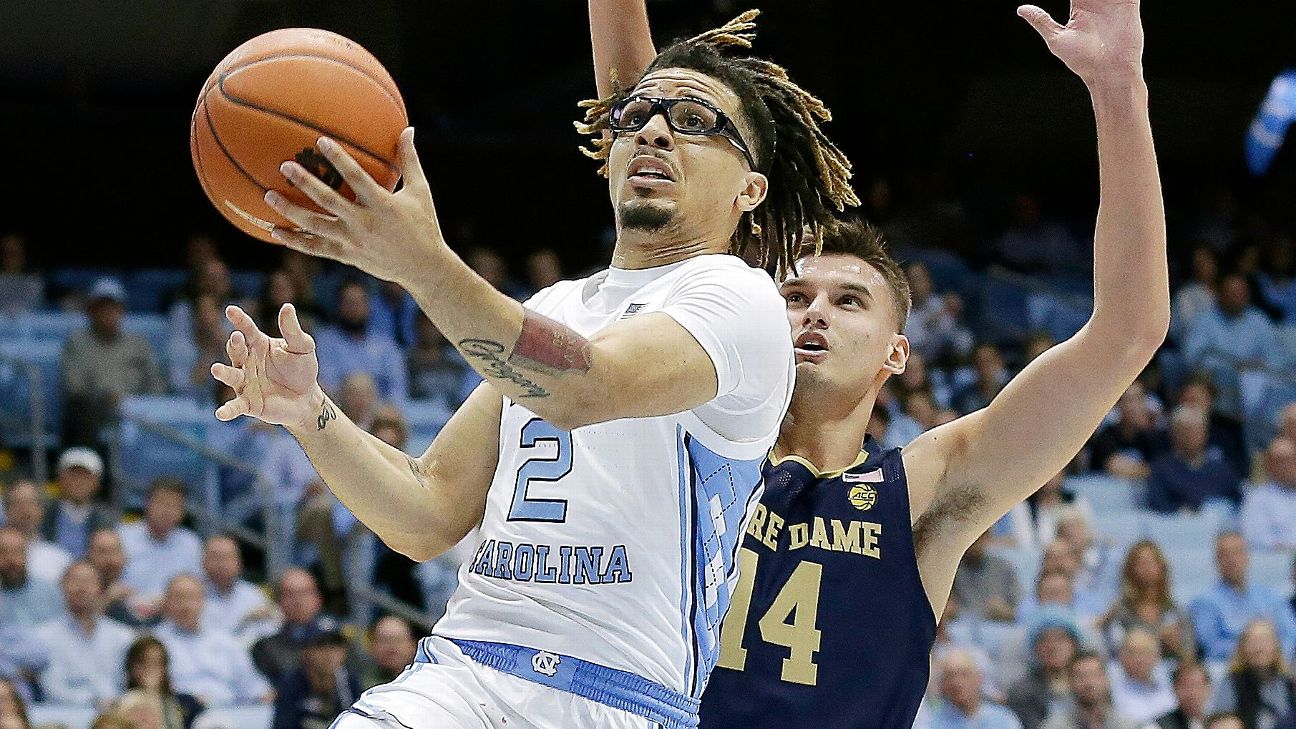 College basketball produced a series of surprises and unexpected chaos in its first week. The No. 1 team lost its season opener. Florida State lost to Pitt, which lost to Nicholls State, but then Leonard Hamilton's squad rallied and beat Florida, a popular Final Four pick entering the season, on Sunday. Merrimack beat Northwestern one week into its four-year transition from Division II to Division I. Syracuse scored fewer points against Virginia (34) than its football team scored against Holy Cross on Sept. 28 (41).

Plus, the NCAA warned Memphis that James Wiseman, ESPN's top recruit in the 2019 class and the projected top pick in the 2020 NBA draft, was "likely ineligible" because his mother had received $11,500 in moving expenses from Penny Hardaway before Hardaway became head coach of the Tigers. Memphis shrugged, and Wiseman played Friday after receiving a temporary restraining order.

My goodness, the season is 6 days old.

But here's what we know so far, and a few things we still need more time to decipher.

Over the past 10 seasons, three North Carolina players have had consecutive 20-point, 10-rebound performances, according to ESPN Stats & Information data. But neither of the first two (Brice Johnson, Luke Maye) played point guard. That's why Cole Anthony's furious introduction to college basketball seemed like a transcendent moment for the projected lottery pick.

We've watched other guards carry the sport in recent years, including former Oklahoma stars Buddy Hield and Trae Young. But Anthony comes to college basketball as one of the most complete guards we've seen at this level. He's a polished prospect who also possesses the flash to ignite his home gym and infuriate an opposing crowd. Through two games, he's already the player you have to watch in college basketball.

When Louisville hired Chris Mack, every reputable voice within the sport praised the move, considering his success at Xavier. And many presumed Mack would eventually find the players who fit his style and win big. This current group at Louisville is a Chris Mack team. Led by Jordan Nwora, Louisville has made 39 percent of its 3-point attempts, 58.6 percent of its shots inside the arc and 75 percent of its free throw attempts through two games. And the Cardinals are still awaiting the returns of David Johnson, a top-100 guard, and Malik Williams, the 6-11 forward who averaged 7.7 PPG, 6.1 RPG and 1.2 BPG last season, from injuries in the coming weeks.

Michigan State entered the season as the No. 1 team in the country after returning the nucleus of its roster, but the three other teams that participated in last season's Final Four had lost the catalysts that anchored their runs to Minneapolis. But Auburn, Virginia and Texas Tech all excelled in the first week of the season.

Virginia held Syracuse to just 0.58 points per possession in a road win last week, a sign that a team that lost Ty Jerome, De'Andre Hunter and Kyle Guy is still one of America's top defensive units. Auburn's Danjel Purifoy (5-for-10 in Friday's 76-66 win over Davidson) is playing with an ease he'd lacked after last season's return from a suspension that stretched across two seasons. And Texas Tech freshman Jahmi'us Ramsey and Stephen F. Austin grad transfer TJ Holyfield could spark another Big 12 title run for Chris Beard's group. All four qualifiers from Minneapolis have regrouped.

Tuesday's Oregon vs. Memphis game is a great barometer for both teams (assuming Wiseman plays)

For this entry, let's assume Wiseman will continue to suit up for the Tigers as his lawyers wrestle with the particulars of his NCAA case. If he's available, Tuesday's matchup between Memphis and Oregon in the Phil Knight Invitational in Portland, Oregon, at 9 p.m. ET on ESPN is a great, albeit early, indicator of each team's potential.

Memphis dominated a pair of overmatched opponents (South Carolina State, Illinois-Chicago) in its first two games. Paired with a collection of five-star freshmen, Wiseman has been a force with eight blocks and just two fouls through two contests while averaging 22.5 PPG and 10.0 RPG.

But Dana Altman's squad might be the perfect foe for the Tigers. Oregon is perhaps the West Coast's most athletic group, with standouts including 6-8 freshman C.J. Walker and New Mexico grad transfer Anthony Mathis, who is 9-for-13 from the 3-point line through two games. The question mark is Francis Okoro, a 6-9 forward who would add much-needed size in this matchup. Okoro missed Saturday's win over Boise State after he was hit by a car while walking on campus last week. But this will feel like a road game for Memphis and its young stars. Looking forward to this matchup.

Kentucky is a balanced team with an evolving offense

John Calipari's group had the most convincing win of the Champions Classic against a top-ranked Michigan State squad that committed 16 turnovers, registered just 0.86 points per possession and missed 21 of its 26 3-point attempts. Tyrese Maxey had a phenomenal debut (26 points) while the rest of the team (12-for-38) struggled on offense. In a win over Eastern Kentucky on Saturday, the Wildcats had six double-figure scorers even though they finished 2-for-14 from the 3-point line.

UK's identity on offense is something it will solidify in the coming weeks. Maxey and Kahlil Whitney as energetic stars, complemented by a group of big men collecting buckets around the rim? Preferably. But the Wildcats' defensive start seems to follow the trend of past Kentucky. Eight of the 10 squads under Calipari in Lexington all held their opponents below a 45 percent clip inside the arc. This group could extend that trend.

Five things we're not sure about yet

What on earth is happening in the state of Florida?

The transitive approach to comparing teams is never a good idea, especially at this point in the season. But Florida State kicked off its season with a road loss to Pitt, a team that suffered a 75-70 loss to Nicholls State on the same floor just three days later. Fine. Weird things happen in early November. But FSU outclassed Florida in Gainesville on Sunday in a 63-51 victory, its sixth consecutive win over its in-state rival.

Florida's Kerry Blackshear Jr.finished 0-for-5 from the field and the Gators committed turnovers on one-quarter of their possessions. It was an ugly effort by both squads but a more surprising display from a Florida team that was picked to win the SEC in the preseason poll. We'll probably dismiss this result in a few months as both teams mature. But it was an odd week for the Sunshine State's finest.

Before last year's eight-bid haul, the Big Ten registered just four invitations to the NCAA tournament -- the league's worst tally in a decade -- during the 2017-18 season. The Big Ten had historically made its mark with depth. But the conference lacked threats in the bottom half of the standings that year. Could the Big Ten repeat the downturn in 2019-20? It's not prudent to make that assessment after the first week. But it was an up-and-down start for the conference.

Contenders Michigan State (Kentucky) and Purdue (Texas) both lost matchups to potential NCAA tournament squads. Days after needing overtime to beat Nicholls State, Illinois suffered a 21-point loss at Arizona on Sunday (five-star freshman Nico Mannion finished with 23 points, 9 rebounds and 2 steals), plus Wisconsin suffered a loss to Saint Mary's in overtime and Minnesota lost to Oklahoma, both at the Pentagon in Sioux Falls, South Dakota.

But the worst results unfolded at the bottom of the league with Northwestern losing to Merrimack, a recent Division II program, and Fred Hoiberg's Nebraska team losing to UC-Riverside and Southern Utah. Might this year's edition of the league face the same challenges with depth that the 2017-18 assembly encountered? Too early to know. But premier games this week (Michigan vs. Creighton on Tuesday, Ohio State vs. Villanova on Wednesday, Purdue at Marquette on Wednesday, Michigan State at Seton Hall on Thursday and Wisconsin vs. Marquette on Sunday) will tell us a lot more about the Big Ten.

How Kansas will fare against more versatile lineups

Kansas committed 28 turnovers in the Champions Classic and still had a chance to beat Duke in the final seconds. Perhaps that's the silver lining, but the two-bigs lineup with David McCormack and Udoka Azubuike starting against Duke on Tuesday and UNC Greensboro on Friday is still a work in progress.

That group boasts benefits on offense for Bill Self as Kansas has made 64.3 percent of its shots inside the arc with the duo on the floor, per HoopLens.com data. After two games against teams with strong perimeter players and versatile forwards, however, KU's two opponents averaged a 48 percent clip inside the 3-point line. Kansas will overwhelm most opponents with its talent, but the two-bigs lineup's ability to defend versatile opponents in the future is a question for Self's squad, a question he highlighted entering the season.

Any tweak to the game can create challenges, especially early in the season. In the first week of the 2019-20 campaign, players, coaches and even officials were clearly adjusting to a pair of new rules that affect the game: an extended 3-point line (from 20 feet, 9 inches to 22 feet, 1.75 inches) and the shot clock resetting to 20 seconds after an offensive rebound.

The 3-point line has generated the most buzz, although the early numbers aren't alarming. But the distance from the basket isn't the only adjustment attached to the extended 3-point line. Throughout the country, multiple players have stepped out of bounds in the corners on offense as they're learning where to set their feet after the change. That's probably the most frustrating element for shooters thus far.

If we'll have any great teams

By this time last season, we knew that a handful of teams, stacked with versatility and future pros, had a chance to be great. In 2019-20, get ready to hear the word "parity" often. The top tier of college basketball should feature a number of excellent programs, but probably not any groups that can run elite opponents off the court the way last year's Duke and Gonzaga teams could.

A year ago, a Virginia team with three NBA prospects didn't surrender 60 points until Thanksgiving weekend. And a Tennessee squad that would seize the top spot in the rankings was undefeated through Valentine's Day. In 2019-20, however, we could have a pool of nine or 10 teams that all enter March with comparable potential but no juggernaut standing between them and the crown. 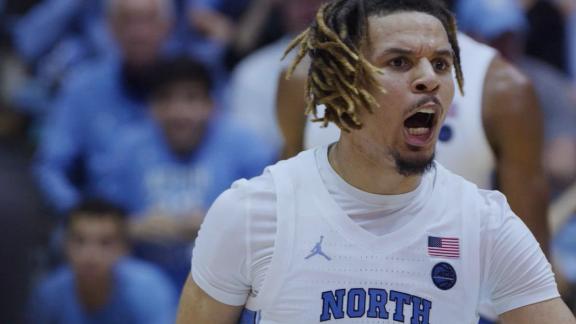