For now, the Zion Williamson show is still a pregame-only affair 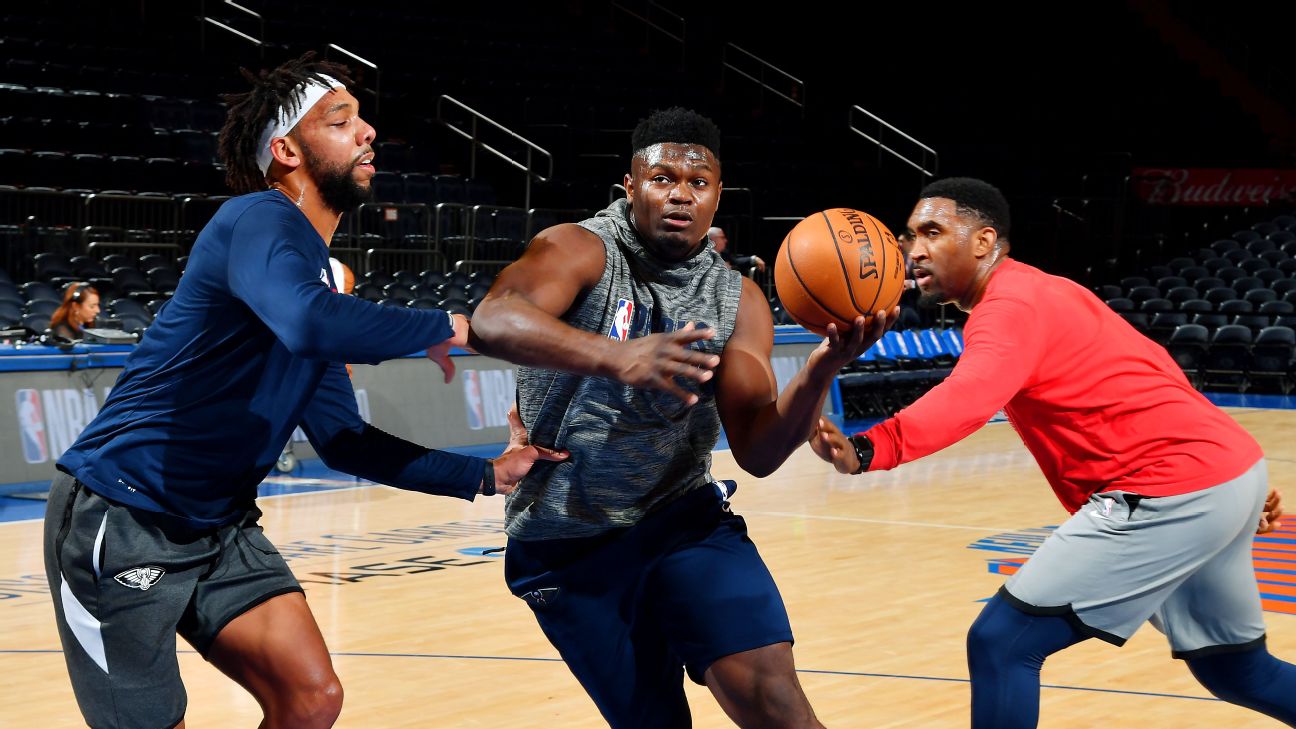 NEW YORK -- As New Orleans Pelicans rookie forward Zion Williamson walked out of the tunnel and onto the court at Madison Square Garden on Friday evening, all the eyes in the arena turned to him.

There was a certain buzz floating around as a few hundred fans with passes to watch warm-ups pulled out their phones and started to snap up the 19-year-old.

Williamson walked out, a smile on his face, and went to work. Children screamed his name and begged for dunks. Media members jostled for position on the baseline getting ready to film a slam or two.

All the while, Williamson went about his business: short jumpers from the corners and wing, working on pick-and-rolls with Pelicans staffers and shooting a few free throws.

He ended it with what has become a staple of his workout -- a between-the-legs dunk. The attempt comes with a stipulation: If Williamson makes it, the Pels' staffers have to do 20 pushups. If he misses, Williamson has to get down and do the pushups.

On Friday, Williamson took his two steps and converted the dunk, much to the screaming delight of those already in attendance.

About 90 minutes earlier, Williamson went through the conditioning phase of his rehabilitation process. He participated in 3-on-3 and 4-on-4 drills with a mix of New Orleans staffers and players, including center Jahlil Okafor, guard Frank Jackson and general manager Trajan Langdon in what could have easily been a small Duke alumni game.

After getting his work in, Williamson reunited with another ex-Blue Devil, RJ Barrett of the New York Knicks. The two former teammates hugged and shared a laugh.

This was supposed to be their first regular-season meeting as professionals. Instead, when the game started, Williamson found himself in his familiar spot on the bench. While Barrett was scoring 16 points on 5-for-15 shooting in the Knicks' 123-111 loss, the No. 1 overall pick was wearing a jacket over his hoodie, still awaiting the OK from the New Orleans front office and training staff to make his NBA debut.

"He's making progress," Pelicans coach Alvin Gentry said of Williamson on Friday morning. "He's practicing. He's playing 5-on-5. We're trying to gauge exactly when it would be a good situation to put him out there. Even when we do, it'll be very limited minutes to start."

Williamson hasn't played since Oct. 13 in the preseason, when he put up 22 points and 10 rebounds against the San Antonio Spurs.

It was after the contest with the Spurs that the rookie first started to feel pain in his right knee. An MRI later showed damage to his meniscus. He underwent surgery on Oct. 21, the day before the regular season commenced.

Coincidentally, the first preseason game Williamson sat out due to the knee pain was in the same place he sat on Friday night: Madison Square Garden, against the Knicks. After seeing the hoopla that preceded that game and Williamson's lone summer league appearance (also against the Knicks), Gentry joked that the Pels certainly weren't going to have him debut Friday.

Putting any added strain on their star rookie is exactly what the Pelicans have been trying to avoid this season. Prior to the preseason, Gentry, team vice president David Griffin and others in the organization repeatedly said the Pelicans were Jrue Holiday's team and that Williamson wasn't in New Orleans to be the savior of the franchise.

The team wanted to bring the rookie along slowly, and it is why the Pels have taken their time with the recovery process after initially putting a time frame of six to eight weeks on his return.

Williamson himself told reporters a week ago that if it was up to him, he would have come back before Christmas, but he understands what the Pelicans are trying to do. The ultimate goal would be to have Williamson healthy for a full 82-game season.

Just over a year ago, Williamson sat inside the locker room in New York after making his Garden debut as a member of the Duke Blue Devils. Then a freshman with just 11 college games under his belt, Williamson battled foul trouble but still finished with 17 points and 13 rebounds in an 11-point Duke victory over Texas Tech.

Multiple Knicks players were in attendance that night, as was team president Steve Mills. After the game, with the Knicks headed toward another trip to the lottery, Williamson was asked about potentially making the Garden his home.

"Forty-one games at the Garden, I mean, it would probably be incredible," Williamson told reporters at the time.

Now, 13 months later, he is staring down the reality of playing fewer than 41 games total in his first NBA regular season -- and none at Madison Square Garden. For now, the Zion Williamson show remains on hold. 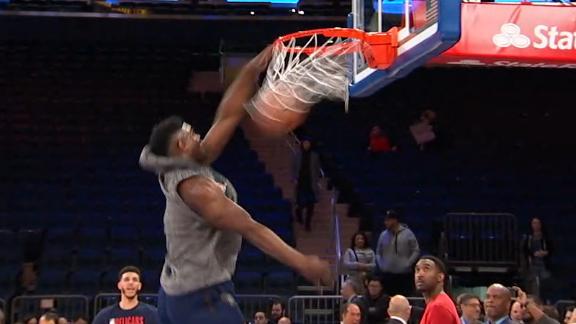 Zion throws down dunk in MSG
Zion Williamson shows that his surgically repaired right knee is better with a dunk during shootaround ahead of the Knicks-Pelicans matchup. 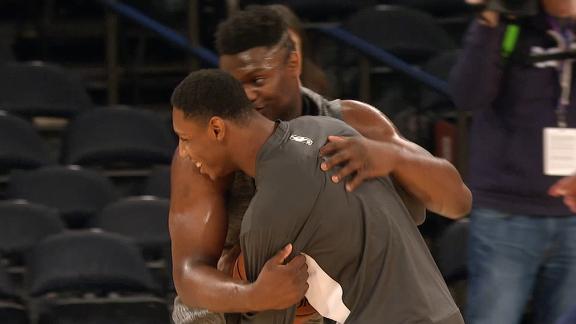