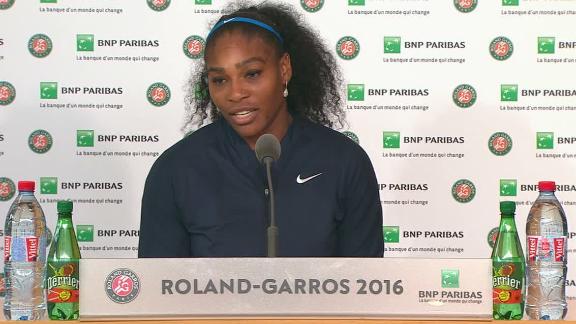 For the third consecutive Grand Slam event, Serena Williams failed to tie Steffi Graf's Open-era record as she lost 7-5, 6-4 to fourth-seededGarbine Muguruza at the French Open on Saturday.

In winning her first major, Muguruza used her powerful groundstrokes to keep No. 1 Williams off-balance and overcame signs of nerves in the form of nine double-faults to pull off the surprise.

Muguruza also managed to deal with Williams' dangerous serve, breaking three consecutive times from late in the first set to early in the second en route to beating Williams for the second time in three years at Roland Garros. In 2014, she handed Williams the worst loss of her Grand Slam career with a 6-2, 6-2 victory in the second round.

After letting four match points slip away in the penultimate game, Muguruza served out the match at love, punctuated by a high lob that caught the baseline as Williams watched.

The winning shot drew a smile from Williams' face and she applauded Muguruza, who put her face in her hands and fell on her back in the red clay of Court Philippe Chatrier as her coach Sam Sumyk jumped from his chair and raised both arms in the air.

"She has a bright future, obviously," said Williams, who at 34 is 12 years older than her Spanish opponent. "She knows how to play on the big stage and ... clearly, she knows how to win Grand Slams."

Muguruza, who lost to Williams in the 2015 final at Wimbledon, became the first Spanish woman to win a Grand Slam title since Arantxa Sanchez Vicario won the last of her three French Open crowns in 1998.

"I can't explain with words what this day means to me," Muguruza said after the match. "You work all your life to get here."

For Williams, whose timing was not exactly right much of the afternoon, Saturday's loss delayed yet again her pursuit of tying Graf record in the Open era, which began in 1968. Margaret Court holds the all-time record of 24.

"She doesn't wake up every morning thinking about it. That's for sure," said Patrick Mouratoglou, Williams' coach. "The pressure of leaving an indelible mark on history is incomparable."

Said Williams:"The only thing I can do is just keep trying."

Williams got No. 21 at Wimbledon in 2015, her fourth major title in a row. But since then, she has been beaten in the semifinals at the US Open by Roberta Vinci in September, in the final at the Australian Open by Angelique Kerber in January, and now by Muguruza.

The loss, which came in her fourth match in four days after rain played havoc with the schedule this week, also ended her 14-match winning streak at Roland Garros.

This year's visit to Paris hardly could have started off more inauspiciously for Muguruza: She lost the very first set she played in the tournament, against 38th-ranked Anna Karolina Schmiedlova.

Oh how Muguruza turned things around from there. She won the next 14 sets she played, displaying the deep groundstrokes and take-the-ball-early aggressiveness that flustered Williams.

The final began under a slate ceiling of clouds, but at least there was none of the heavy rain that led to flooding in Paris and a temporary shutdown of the Louvre museum.

Muguruza won the prematch coin toss and let Williams serve first, a fascinating choice given that Williams is widely regarded as the best server in the women's game, perhaps ever. The decision seemed only more dubious as Muguruza managed to put the ball in play on only one of the first six points Williams served. On one early point, Muguruza whiffed completely on an attempted backhand return of an 89 mph (143 kph) high-kicking second serve.

It all worked out. Muguruza broke a total of four times, twice in each set.

"I have grown up playing on clay," Muguruza said during the trophy ceremony, "so for Spain, and for me, this is amazing."

After saving two break points herself to get to 2-all, Muguruza nosed ahead first, when Williams combined three errant backhands with a double-fault to hand over the lead.

An additional dose of confidence arrived in the next game, despite beginning with two-double faults to create a love-30 hole. Muguruza quickly pulled herself out, taking the next four points to go up 4-2, capped by a down-the-line forehand winner on the 11th stroke of the exchange.

Muguruza won all six points of 10 shots or more in that opening set and, indeed, there was no junkballing on this day. Both women hit hard, quite hard, trading bold forehands and backhands from the baseline. It seemed unfair to characterize nearly anything as an "unforced error," considering the way each made things so tough on the other.

Williams had more difficulty putting shots right where she wanted, an unusual sight. She wound up with 39 forced errors, 18 more than Muguruza.

Information from ESPN Stats & Information and The Associated Press were used in this report. 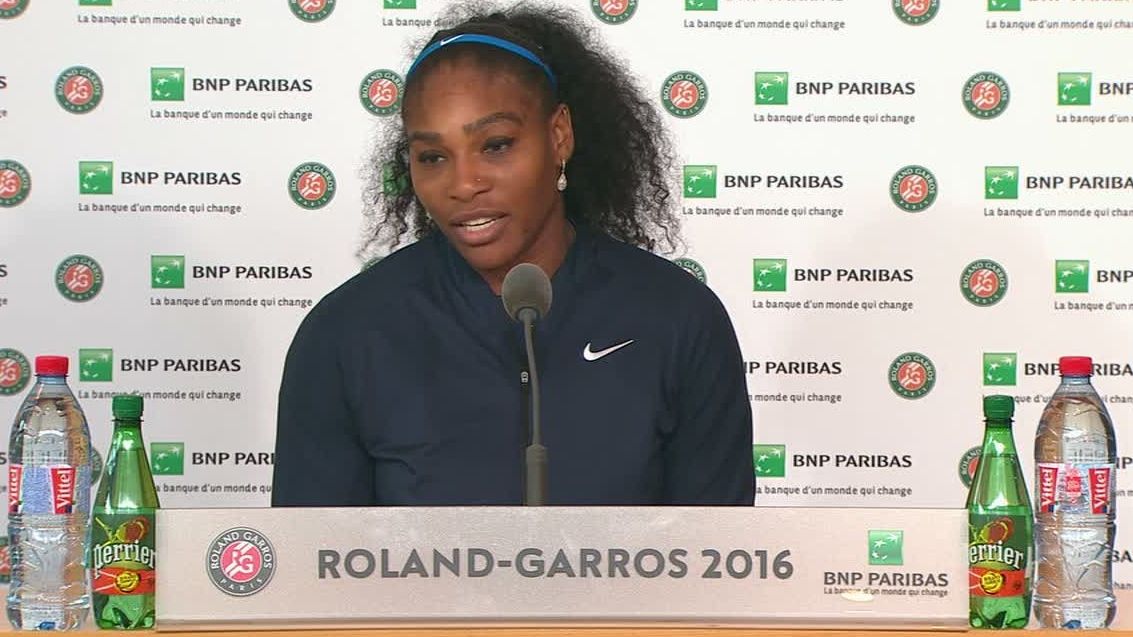