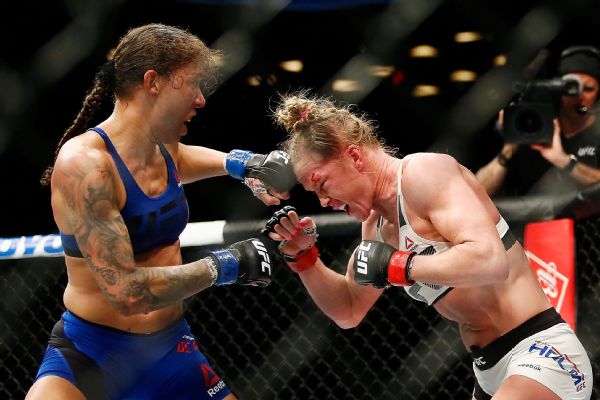 NEW YORK -- Germaine de Randamie is the first UFC female featherweight champion. And Holly Holm is 0-3 since her stunning knockout of Ronda Rousey.

De Randamie (7-3) bested Holm via unanimous decision at UFC 208 on Saturday inside Barclays Center in Brooklyn.

All three judges scored the bout, which was the first 145-pound championship fight in UFC history, 48-47 in favor of de Randamie.

Heading into the weekend, de Randamie had just three career wins in the UFC against opponents with a combined UFC record of 0-6. Prior to the fight, she acknowledged this as the biggest opportunity of her career, and she was able to take full advantage of it.

"It was a close fight," de Randamie said. "In the third round, she caught me with a head kick. But I came to fight. She didn't come to fight. I like to fight."

Holm (10-3) has struggled greatly since knocking out Rousey in stunning fashion in late 2015. A former world boxing champion, Holm ran into counter punches from de Randamie all night and actually looked to take her down repeatedly.

The game plan served to frustrate de Randamie a bit, but it did not get her to the floor. Holm scored some offense along the fence in the form of short knees, but her strategy mostly resulted in long stalemates, which the New York crowd booed.

At the end of the second and third rounds, de Randamie threw a late right hand after the bell. The first one visibly wobbled Holm, but referee Todd Anderson did not take a point on either occasion, which would have proven crucial.

"It wasn't meant for me to hit her after the bell," said de Randamie, who fights out of the Netherlands. "It was a heated moment. I apologize. I'm not like that.

"I hoped she was going to fight with me. I truly respect her. I love to brawl. I love to fight. Clinching is not my game, but whatever."

Holm, who fights out of Jackson-Wink MMA in Albuquerque, New Mexico, briefly knocked de Randamie down with a head kick in the third. She also seemed to hurt her with a knee to the body and a hard straight left in the fifth. The crowd was very much on Holm's side, but it wasn't enough to sway the judges.

According to Fightmetric, de Randamie out-landed holm 157 to 93 in total strikes.

The victory could set up a high-profile fight between the newly crowned de Randamie and Cris "Cyborg" Justino (17-1), the most dominant featherweight in female MMA history. De Randamie nodded as the fight was brought up but said she will likely require hand surgery first.

Justino, who was cageside in Brooklyn, was flagged for a failed drug test in December but is in the process of applying for a retroactive therapeutic-use exemption. The case is pending, but UFC president Dana White told ESPN.com this week that Justino's situation was looking "really good" compared to one month ago.