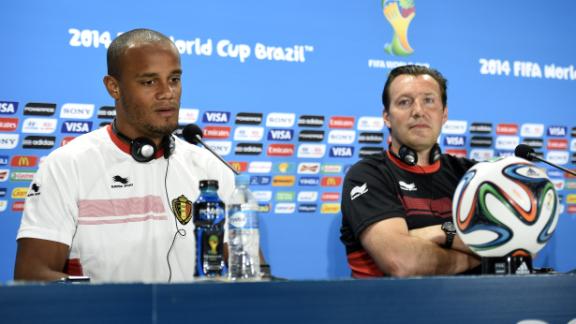 Eden Hazard has been told to play for his teammates rather than himself as Belgium prepare to get their World Cup campaign underway on Tuesday.

Chelsea midfielder Hazard will make his first appearance at a major tournament, Belgium's first since 2002, when they take on Algeria in their Group H opener.

Belgium coach Marc Wilmots told his prematch news conference that Hazard -- who made the 23-man longlist for the Ballon d'Or last year -- has what it takes to compete for the individual prize in the future, but must focus on doing what is best for his national side in Brazil.

"Eden can be one of the best five players in the world," Wilmots said. "He has everything he needs, it's now up to him to release the handbrakes and go.

"He's 23 and has already shown what he can do. But he won't be able to do it alone. Everyone, including him, has to sacrifice himself for the collective.

Hazard will be lining up alongside striker Romelu Lukaku and goalkeeper Thibaut Courtois, two of world football's most promising young players also on the books at Stamford Bridge but who have been away on loan for the past few seasons.

With a squad which also includes Manchester City captain Vincent Kompany, Manchester United duo Marouane Fellaini and Adnan Januzaj, Arsenal captain Thomas Vermaelen and Tottenham trio Jan Vertonghen, Mousa Dembele and Nacer Chadli, many have dubbed this current group of Red Devils players as a "golden generation," but Wilmots insists that tag will only be justified if they perform at the tournament.

"I'll only accept the term when we achieve something," he said. "We haven't even made the first step yet. But we are a nation of just 11 million and I'll have no regrets if it doesn't work out."

Kompany added that the fact so many of his compatriots play their club football in England has helped bring cohesion and togetherness to the squad.

"This is the first World Cup for most of us but I've been with this group for 10 years and we all get on really well," the Premier League-winning skipper said. "We haven't been to a World Cup for a long time and whatever happens I'll remember it for ever.

"For all of us in the Premier League, there have been no difficulties making the transition. We've known each other all the way up from youth level.

"No conclusions should be drawn from the first game but I have high ambitions and really want to fulfil my dream of going a long way."