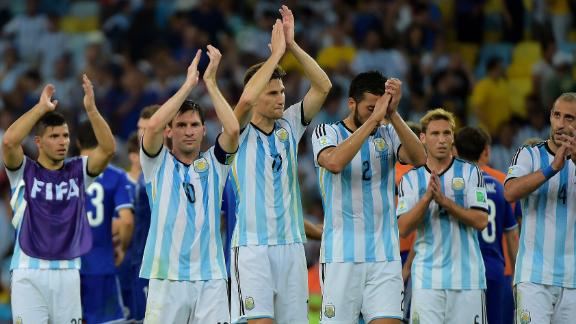 Napoli centre-forward Gonzalo Higuain has said he would like to play alongside Lionel Messi at Barcelona after the two linked superbly in Argentina's 2-1 World Cup win over Bosnia-Herzegvina on Sunday.

Marca claim Higuain has already agreed personal terms with Barca, and the club are confident that they can reach a deal with Napoli.

However, the Serie A side reacted to those claims by saying they had no basis in fact.

But speaking to news agency EFE after the Bosnia match, the former Real Madrid striker, 26, said: "Yes, of course [I would like to play alongside Messi at Barcelona]. Obviously it would be an enormous pleasure. I am pleased by the Barca interest -- any player would be.

"But I am focused now on the World Cup. There will be another time to talk about my future. I am here now, focused on this dream, trying for us all to be able to achieve our objectives."

Higuain replaced centre-back Hugo Campagnaro at half-time, with Argentina coach Alejandro Sabella also introducing Fernando Gago for Maxi Rodriguez and changing shape from the starting 5-3-2 to the 4-3-3 formation he had used throughout their qualifying campaign.

Sabella told his post-game news conference that his starting XI had been a mistake, and that Higuain's presence as a focal point in attack had helped Messi to find more space -- especially when the pair combined for the captain's fine goal.

"It was very even in the first half," he said. "In the second half, with the entrance of Higuain, the team loosened up and began to create goal chances. With Higuain, Leo had more company, we could play as we had for so long in the qualifiers. Two-nil was a generous scoreline, 2-1 was fair."

Sergio Aguero played the No. 9 role in the first 45 minutes, but had little impact and told Ole he had been frustrated during the opening period and agreed with the tactical switch.

"It was difficult because I had to stay right up against the two centre-halves," he said. "I could not drop deeper because that would interfere with the work of Leo [Messi]. In the second half, the coach changed the shape and that helped us. And we won, which was the primary thing."

Messi, Argentina slip past Bosnia
The ESPN FC panel weigh in on Argentina's performance in their 2-1 victory over Bosnia-Herzegovina.