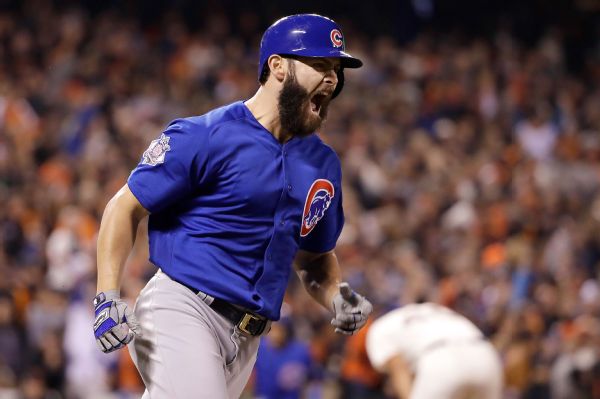 Arrieta hit a 1-2 pitch out to left field for a three-run home run, two days after Cubs relief pitcher Travis Wood homered against the Giants in Game 2. It's the first time since the 1924 Giants that two pitchers from the same team have gone deep in a playoff series; 1924 also was the last time a relief pitcher hit a home run in the postseason.

"It was probably the best pitch I threw to (Arrieta) in the at-bat," Bumgarner told the Chicago Tribune. "I was thinking about going to the breaking ball, but the way it looked to me, I didn't see any need to. Sometimes you feel like you can help a guy out by slowing it down. But from what I saw, I felt like I was making the right pitch. He just made a good adjustment."

Arrieta's homer gave the Cubs a 3-0 lead, but the Giants battled back and eventually prevailed 6-5 in 13 innings in a game that lasted more than five hours. The San Francisco victory prevented a Cubs sweep.

Arrieta is the fourth Cubs pitcher to hit a home run in the playoffs, while Bumgarner gave up his first long ball to an opposing pitcher in his seven-plus major league seasons. It also ended Bumgarner's 24-inning postseason scoreless streak and his separate streak of 24 shutout innings with the Giants facing postseason elimination.

It was Arrieta's fifth career home run and third this season.