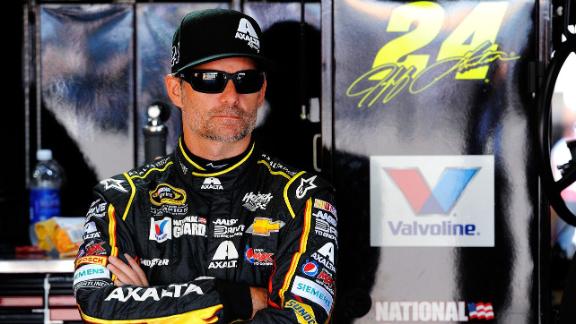 Four-time NASCAR Sprint Cup championJeff Gordon announced Thursday that the 2015 season will be his last as a full-time driver.

"As a race car driver, much of what I've done throughout my life has been based on following my instincts and trying to make good decisions," Gordon said in a release. "I thought long and hard about my future this past year and during the offseason, and I've decided 2015 will be the last time I compete for a championship.

"I won't use the 'R-word,' because I plan to stay extremely busy in the years ahead, and there's always the possibility I'll compete in selected events, although I currently have no plans to do that."

Gordon told The Associated Press that he decided midway through 2014 that this upcoming season would be his last.He delayed the announcement until Thursday, when he first told his two young children at home in Charlotte, North Carolina.

Gordon says that's when his decision became a reality, and he broke down in tears. He said he continued sobbing the entire 30-minute drive to Hendrick Motorsports, and again lost his composure as he informed his team and longtime employees.

Teammate Jimmie Johnson and other NASCAR drivers took to Twitter to express their appreciation of Gordon.

"Jeff Gordon transcends NASCAR and will be celebrated as one of the greatest drivers to ever race," NASCAR chairman Brian France said in a statement. "We have all enjoyed watching his legend grow for more than two decades, and will continue to do so during his final full-time season. His prolonged excellence and unmatched class continue to earn him the admiration of fans across the globe.

"Today's announcement is a bittersweet one. I'll miss his competitive fire on a weekly basis, but I am also happy for Jeff and his family as they start a new chapter. On behalf of the entire NASCAR family, I thank Jeff for his years of dedication and genuine love for this sport, and wish him the very best in his final season."

Gordon is coming off one of his best seasons in years. He won four times in 2014, including the Brickyard 400, and was sixth in the Sprint Cup standings. He finished in the top-5 on 14 occasions and won three pole positions.

"I'll explore opportunities for the next phase of my career, but my primary focus now and throughout 2015 will be my performance in the No. 24 Chevrolet," Gordon said. "I'm going to pour everything I have into this season and look forward to the challenge of competing for one last championship."

With 761 consecutive starts in a Cup Series race, Gordon should pass Ricky Rudd's all-time record of 788 this season.

Gordon won all the big races -- three Daytona 500 victories and a record five Brickyard 400 wins are among them. He collected four championships in seven years and had 58 victories before his 30th birthday. He brought the Southern sport to Madison Avenue and became such a household name that he even hosted "Saturday Night Live." And he was the "Rainbow Warrior" who racked up wins at a record pace.

The 43-year-old, however, suffered serious back issues years ago, specifically in his lower spine, and needed anti-inflammatory medication and workouts with a trainer to return to full strength. He drove in pain during a winless 2008 season and briefly contemplated retirement.

Leading up to last year's Daytona 500, Gordon said he would retire if he won a fifth championship. Now, he's all but made it official.

"I don't foresee a day when I'll ever step away from racing. I'm a fan of all forms of motorsports, but particularly NASCAR. We have a tremendous product, and I'm passionate about the business and its future success," Gordon said. "As an equity owner in Hendrick Motorsports, I'm a partner with Rick [Hendrick] and will remain heavily involved with the company for many years to come."

"... Racing has provided a tremendous amount of opportunity that's been extraordinarily rewarding and fulfilling in my life."

Gordon, who has won on every current NASCAR track with the exception of Kentucky Speedway, earned the nickname "Four-Time" because of the Cup titles early in his career, though wins have been harder to get as his career stretched into its second decade.

He posted winless seasons in 2008 and 2010, and even in the years he qualified for the Chase in Sprint Cup championship, he was never a true threat to bring home the title.

Last season, however, Gordon missed the championship round by one point.

"There's simply no way to quantify Jeff's impact," Hendrick said in a statement. "He's one of the biggest sports stars of a generation, and his contributions to the success and growth of NASCAR are unsurpassed.

"There's been no better ambassador for stock car racing and no greater representation of what a champion should be. I will never be able to properly express the respect and admiration I have for Jeff and how meaningful our relationship is to me. I'm so grateful for everything he's done for our company and my family, and I look forward to many more years together as friends and business partners."

Hendrick, who also fields cars for Johnson,Dale Earnhardt Jr.and Kasey Kahne, did not name a replacement. Hendrick developmental driver and reigning Xfinity Series champion Chase Elliot could be in the mix to take over in the No. 24 Chevrolet.