Jerry Jones: Cowboys must be 'mindful' of 'chemistry' in making QB call between Prescott, Romo 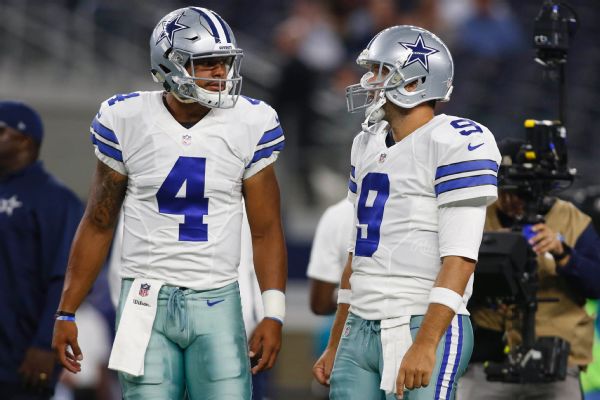 Jones consistently said earlier that Romo was the No. 1 quarterback. Now the longtime Cowboys owner sounds open to the idea of keeping Prescott at quarterback with the Cowboys off to a 6-1 start and holding the best record in the NFC.

"You want to be very mindful of what you've got going, which right now we've got a lot of chemistry going," Jones said on 105.3 The Fan in Dallas on Tuesday. "That has got to be really recognized if you're making a decision."

Jones was asked directly if Prescott would remain the starter.

"I don't want to speculate on what we're going to do when the time comes," said Jones, who also said the final decision would come from a group that includes the front office, coaches and Romo.

Prescott will start Sunday against the Cleveland Browns, and Jones said he was not sure Romo would be ready to play Nov. 13 against the Pittsburgh Steelers.

Thursday marks 10 weeks since Romo suffered a compression fracture in his back against the Seattle Seahawks. At the time of his diagnosis, Romo was given a six-to-10-week recovery period, but because of the injury he was unable to continue his core work that has been a staple of his workouts since undergoing two back surgeries in 2013.

"I do think that unquestionably Tony is going to be ready to go at some point near the end of the year, and we'll evaluate things at that time," Jones said.

"Tony has no issue doing what's best for the team," Jones said.