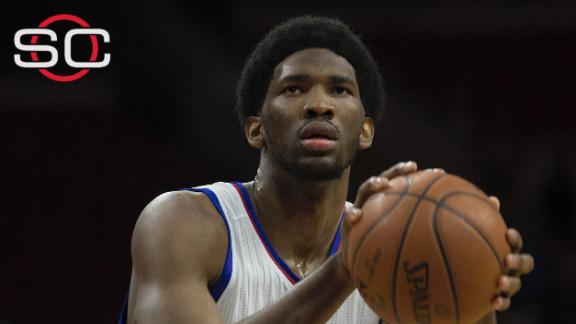 Philadelphia 76ers center Joel Embiid needs another surgery on his injured foot and likely will miss the entire 2015-16 season.

"A collective decision has been made that the best approach to promote full healing would be to proceed with a bone graft of the fracture site," 76ers president and general manager Sam Hinkie said in a statement Saturday night. "We anticipate the procedure will take place in the next 7-10 days and result in Joel missing the upcoming season. "

While Embiid is not experiencing pain in the foot, test results showed a regression in the healing process.

"[A] group of [medical] experts unanimously agreed that the routine CT scan in June did reveal less healing than anticipated, an unexpected result since Joel was not experiencing any foot pain," Hinkie said.

The team is still working to determine which doctor will perform surgery on the 21-year-old 7-footer.

The Philadelphia Inquirer first reported news of Embiid's surgery earlier Saturday. According to the Inquirer's sources, Embiid's latest setback could be career-threatening.

Embiid, the No. 3 overall pick in the 2014 NBA draft, sat out all of 2014-15 -- though he raised hopes late in the season when an on-track recovery had him shooting, running and dunking at practices and pregame drills.

But Hinkie acknowledged last month that the team was considering surgery for Embiid and that the big man's foot "doesn't seem to be healing as well anymore."

With Embiid's availability clearly in doubt, the 76ers selected 6-foot-11 Jahlil Okafor with the No. 3 overall pick in this year's draft.

Windhorst: Almost no margin for error for Embiid
Brian Windhorst has the latest on 76ers center Joel Embiid, who will need a second surgery on his foot. A prior surgery had that kept him out his entire rookie year.