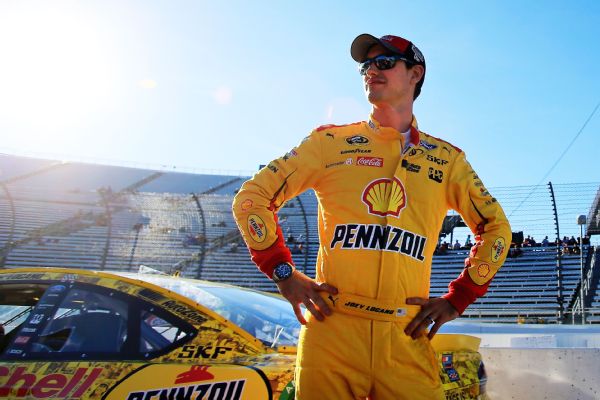 In an improbable turn of events, Kenseth came within two laps of a spot in next week's title-deciding finale but instead was eliminated from NASCAR's playoffs. Logano was gifted a victory Sunday that put him in the final four after a tense double-overtime event at Phoenix International Raceway.

Kenseth had the win in hand until a late caution sent the race to extra laps. Although he cleared traffic on the restart, his teammate Kyle Busch had contact with Alex Bowman that altered Bowman's racing line.

Kenseth's spotter told the driver he was clear, but he actually cut down on Bowman and the contact caused him to crash.

Logano saw the sequence unfolding, let off the gas early and slid into the lead after the accident. He then held off Busch in the second overtime for the win that qualified him for next week's championship race at Homestead-Miami Speedway. Before Kenseth's accident, Logano was in danger of elimination.

"I'm like, 'Oh, shoot, we're out,' and it was going to be so close there at the end to try to get ourselves through, and next thing you know the caution comes out and the whole game changes," Logano said. "We find ourselves as the leader, and we win the race. That's NASCAR racing at its finest."

Logano won the race -- the second time in this Chase that he used a victory in an elimination race to advance -- and will compete for his first Sprint Cup title next Sunday. He will try to give Roger Penske a season sweep during the team's 50th anniversary season. Simon Pagenaud won the IndyCar title in September.

"I've never felt this good about a win before," Logano said. "There was so much on the line, and everyone brings their A-game when it comes to winning championships and this team did it.

Busch finished second and earned a chance to defend last year's title. He will meet Joe Gibbs Racing teammate Carl Edwards and Jimmie Johnson, who is seeking a record-tying seventh championship, in Homestead.

JGR, which was trying to get all four of its Toyotas into the final, wound up with only two, and Busch wasn't feeling celebratory. He said he believed his contact with Bowman triggered the accident that wrecked Kenseth's season.

"It's really unfortunate and devastating to have the race come down like that," Busch said. "That's so frustrating and aggravating, and I feel horrible."

Eliminated from the playoffs Sunday were Kevin Harvick, an eight-time winner at Phoenix who had raced in the last two finales, and his Stewart-Haas Racing teammate Kurt Busch. Gibbs drivers Kenseth and Denny Hamlin were also knocked out of the field.

"Disappointing would be the way to put it lightly," Kenseth said. "Finish that race five minutes before that, looked like we had a chance to go race for a championship. It was a big swing in 10 or 15 minutes."

Hamlin finished seventh after a bizarre decision not to pit with the rest of the field for track position. Although it gave him a brief lead, he was no match for drivers with fresh tires.

"I knew it was going to be an uphill climb," Hamlin said.

PIT ROAD PENALTIES: NASCAR picked Sunday to enforce a rule against passing the pace car when a driver dips onto pit road for a stop. Martin Truex Jr.and Johnson were both penalized for the infraction, and the punishment was holding the car for a lap on pit road.

"I don't understand that in the least little bit," Johnson said on his radio. "This is absolutely ridiculous, NASCAR. I have no clue what I did wrong."

Johnson said he will ask for clarification this week.

"In 15 years, that has never been a concern, and I was always told that the last thing NASCAR wanted to do would be to penalize the leader," Johnson said. "I am still baffled, and I don't know if I will stop being baffled."

BOWMAN OUT FRONT: Bowman badly wants a job for next year, and his continued strong pace as the replacement driver for Dale Earnhardt Jr.is giving him a solid case to present to prospective employers.

Bowman had led just nine laps in his first 79 career Sprint Cup races. Six of those laps were earlier this year driving Earnhardt's Chevrolet. A pole-winning run for Sunday's race helped Bowman lead a race-high 194 laps, and he was attempting to win the race before the late accident. He faded to sixth and felt bad about his incident with Kenseth.

"I hate it for Matt. I would have raced the hell out of him for the win but definitely don't want to do that," Bowman said. "Hate that, and it ruined our day too. So it's unfortunate."

UP NEXT: The season finale at Homestead, where the championship will be decided. Harvick won the race in 2014 to win his championship, and Kyle Busch won last year to claim the title.