John Farrell to return as Red Sox manager in 2017 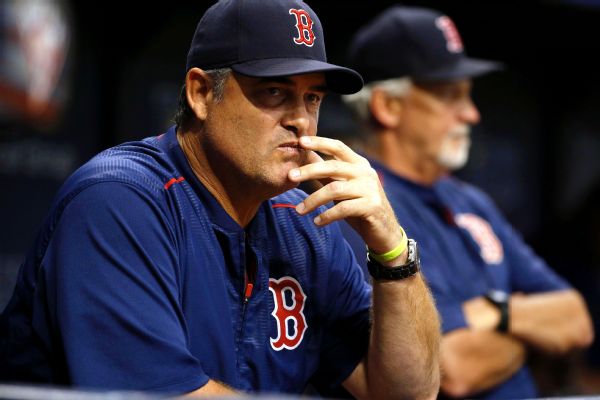 John Farrell will return to manage the Red Sox next season. President of baseball operations Dave Dombrowski casually gave the news to Farrell in the less than 10 minutes between their respective season-ending news conferences Tuesday at Fenway Park.

"I just thought that, for me, John has done a fine job this year," Dombrowski said less than 24 hours after the Red Sox were swept out of the AL Division Series by the Cleveland Indians. "I've been happy with working with him myself. I think he has the respect of the clubhouse. We played hard. I thought we had a good season. We won the division title. We communicate well with one another. And so, for me, there's some decisions you just need to address as quickly as you possibly can because you know how important they are. I just thought it was the right time to do it, so that's why I did it."

Farrell has one year left on his contract plus a team option for 2018. Although Dombrowski pledged his support for the manager, he also declined to address whether the Red Sox will pick up the option, saying that ownership would be involved in "something of that magnitude."

But committing to Farrell for 2017 without exercising his option would be tricky business. For one thing, it would raise questions about his job security, placing him firmly on the proverbial hot seat from the first time the team endures a losing streak.

"I need to sit down with ownership and discuss that," Dombrowski said. "For me, it was just a matter of, I think it's important for everyone to know he's our leader going forward. He's very well respected, and it gives him a clearer mind that he needs to go along with his staff to move forward."

Farrell was scrutinized more heavily than usual throughout the season by critics who were restless after back-to-back last-place finishes in the AL East. Not even a 93-win season and a division title could quiet the anti-Farrell crowd, which piped up again Monday night after a questionable pinch-hitting decision in the seventh inning of a 4-3 loss in Game 3.

But Dombrowski made clear that he doesn't consider in-game strategy to be the most important job of a manager. Instead, he values a manager's ability to understand how to reach each player on the roster in order to optimize their performances, a skill he believes Farrell possesses.

"I do not feel that in-game strategy is the biggest thing as a manager," Dombrowski said. "I think it's important, but there's other things that I think are probably more important. As I've often told managers, to me, the most important thing for a manager is that their club plays up to their capabilities day in and day out, which means that they're communicating with their players and they're getting everything that they can and that their club is playing hard."

During spring training, Dombrowski noted that he hadn't gotten an opportunity to evaluate Farrell as a manager, mainly because Farrell missed the final two months of the 2015 season while being treated for non-Hodgkin Burkitt lymphoma -- which many critics believed saved Farrell from getting fired.

But in his typical fashion, Dombrowski made nearly every road trip with the Red Sox and had ample time to form a judgment on Farrell's managerial ability.

Dombrowski said Farrell's entire coaching staff will be asked to return. But after being asked to stay on as a bench coach for this season, Torey Lovullo is free to pursue managerial opportunities, according to Dombrowski. Lovullo has been a candidate for several managerial vacancies in the past.
Related topics:
sportsespnjohn farrelldave dombrowskiboston red soxmlbbosox
Copyright © 2022 ESPN Internet Ventures. All rights reserved.
TOP STORIES
Man accused of killing 9-year-old in Durham on trial in federal court
Police investigating two shootings in Cumberland County
NC abortion legal battle looms amid standoff between AG and GOP
Migrants in search of a better life continue to die on their journeys
Why you should pay down your credit cards right now
R. Kelly due in court for sex abuse sentencing in NYC
FDA advisers recommend updated COVID booster shots for fall
Show More
Fort Bragg soldiers reunite with families after deployment
Fourth of July 2022 will cost families more this year
NC GOP unveils state budget; House backs Medicaid expansion path
2 Raleigh women shot while on business in California
Workers fired for not joining company's daily Christian prayer: EEOC
More TOP STORIES News