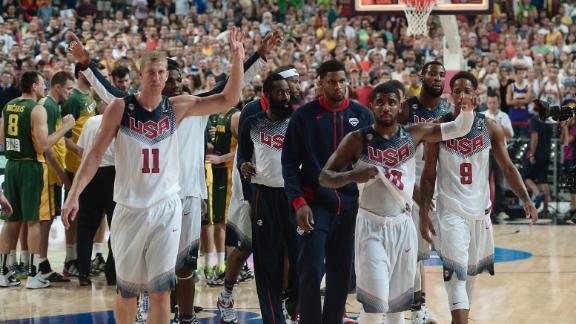 Kenneth Faried was the only player willing to say what at least a few members of Team USA are presumably feeling after advancing to a gold-medal game that won't have Spain on the other side.

Following a comprehensive 96-68 trouncing of Lithuania in Thursday night's semifinals, Faried admitted he's "disappointed" Spain won't be the opponent in Sunday's championship game of the 2014 FIBA Basketball World Cup because he "wanted to beat them in their own country."

A number of Faried's teammates declined to publicly share the same sentiments, well drilled to avoid anything resembling a controversial statement while representing their country.

Yet it's been clear for days that numerous members of the squad, having been subjected to questions all summer about the team's many high-profile absentees, as well as the threat of losing to Spain on Spanish soil without the likes of Kevin Durant and Kevin Love, have grown weary of fielding questions about the host country.

That shouldn't be much of a problem anymore after Spain suffered a thoroughly unexpected quarterfinal loss Wednesday to a France team missing NBA All-Stars Tony Parker and Joakim Noah. Team USA will instead play Friday night's France-Serbia winner in Sunday night's title game in Madrid.

"Obviously everybody wanted to see us play Spain, but we're not," Team USA guard Kyrie Irving said after his team-high 18 points against Lithuania helped spark the Americans' latest second-half surge.

"So those questions," Irving continued, "can go out the window."

Asked how much he'll miss talking about the prospect of a showdown with the host nation in Madrid, after two previous star-laden American squads narrowly beat Spain in the 2008 and 2012 Olympic gold-medal games, Irving smiled and said, "Not at all."

When another reporter suggested to Derrick Rose that Team USA was lucky to dodge the Spaniards, Rose said, "Lucky? Come on. Luck don't have anything to do with it. ... I think that's one of the reasons why we came over here ... to play them. Too bad we're not playing them now. Hopefully, we go out there in our next game and play hard and just know that we're there for a reason."

Faried, who along with Team USA guard Klay Thompson has been in the spotlight this summer more than he typically is in the NBA, was the exception in terms of revealing his true feelings about the Spaniards. He said some media members were guilty of giving Spain "too much hype" while being "borderline disrespectful" to the American big men and their chances of succeeding against brothers Pau Gasol and Marc Gasol and Serge Ibaka.

"I've been trying to hold my tongue for this one," Faried said. "I felt as though we came out and did our job, and y'all kept saying, 'Oh, you're not going to beat Spain.' Spain couldn't even beat France. When Spain can meet us at the championship game, then come talk to me."

Most international basketball experts now expect Team USA to face the French in the title game, assuming France can replicate the suffocating defense seen Wednesday night in a 65-52 quarterfinal smothering of Spain. NBA players Boris Diaw, Nicolas Batum and Rudy Gobert are the most prominent players on the France squad with Parker and Noah out.

Serbia, meanwhile, lost to France by only one point, 74-73, when the teams met in pool play. But Team USA will undoubtedly be favored against either foe, thanks to an average margin of victory of 32.5 points through its first eight games in the tournament.

"I'm not a promotions person," Team USA coach Mike Krzyzewski said, scoffing at the suggestion from one reporter that the World Cup had "lost its luster" thanks to Spain's demise. "I wasn't a marketing major. I'll let everybody who wants to do that take care of it.

"I'm not surprised about anything in international competition. If we feel we can lose, we know anybody else can lose."

Far more important to Krzyzewski, as a West Point graduate, was reminding his players that Team USA earlier in the day would be playing in a semifinal game on the 13th anniversary of the Sept. 11 attacks, just as Team USA did four years ago at the FIBA World Championship in Turkey, where Durant erupted for a USA Basketball-record 38 points in another win over Lithuania.

Before tipoff in Thursday's comfortable win over Lithuania, starting center Anthony Davis tweeted a picture of the American flag with a #NeverForget hashtag.

"It's pretty inspirational," Team USA guard Stephen Curry said. "I know a lot of people back in the States, and [we're] proud to represent our country doing what we do, which is play basketball and do it the right way."

Team USA Cruises To Final
USA defeated Lithuania 96-68 to advance to the final of the 2014 FIBA World Cup.