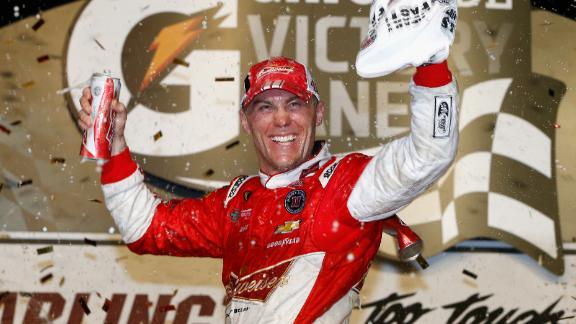 DARLINGTON, S.C. -- Kevin Harvick used one of the few weekend missteps to pull out his first Darlington victory.

Harvick was among several veteran drivers fighting for the Nationwide Series win Friday night when rookie Chase Elliott used fresher tires and a strong machine to move from the back of the pack to first place over the final two laps.

On Saturday night in the Sprint Cup race, Harvick took advantage of four new tires to pass Dale Earnhardt Jr. two laps from the end to win the longest race in the track's 65-year NASCAR history. The grippier rubber let Harvick race the high line while others slipped or spun tires trying to get going.

"I kind of learned that last night as we were in the Nationwide race," Harvick said. "It was a good tool in your bag to have there at the end."

Harvick earned his first pole here Friday night and had the most dominant car. But he had to make it through a restart with 10 laps left and two tries at a green-white-checkered finish -- NASCAR's version of extra innings.

"It was a good night and a really great weekend," he said.

"It hurts a little bit to come this close," Earnhardt said. "Running second's great, but nobody's really going to remember that."

Harvick led 239 of the 374 laps, seven more than planned, and became the first two-time winner in the first eight races of the season. It also gave a bit of relief to those winners under the new 16-team Chase for the Sprint Cup championship that they wouldn't have to jostle with 26 winners -- there are 26 races before the final 10 playoff events -- to try and make it in.

"It feels great," Harvick said. "It's allowed us with the way the points system is to go for wins and not have to worry about the bad weeks too much."

Harvick had just three top-fives and six top-10 finishes in 17 career Darlington races before this. He hadn't finished better than fifth in his last 10 tries, but clearly had the strongest machine this time out.

He was cruising along with 10 laps left when Joey Logano's car leaked fluids on the track. Johnson and Earnhardt took just two tires in the pits and snuck out ahead of Harvick, who had taken four tires and restarted fifth.

Earnhardt quickly moved past Johnson for the lead until Denny Hamlin hit the wall for the 10th caution to set up the overtime finish.

Earnhardt was still out front on that restart when Clint Bowyer got too close to Kurt Busch and spun him out -- Busch made sure to walk up the track and stare down Bowyer -- to force a second green-white-checkered finish.

This time, Harvick and his fresher tires easily got past Earnhardt and drove on to his second win since joining Stewart-Haas Racing this offseason, adding Darlington to his win in Phoenix this year.

"Cautions breed cautions," Johnson said. "I would assume there was a lot of pent up anger out there through 495 miles of racing (and) when a guy has four tires on him I'm sure he was pretty aggressive in the middle of the pack."

Kyle Busch was sixth and Jeff Gordon, the points leader coming in, was seventh. Rookie Kyle Larson was eighth with Tony Stewart and Ryan Newman rounding out the top 10.

But there were plenty of powerhouse drivers who hadn't yet broken through -- the three Hendrick stalwarts in Gordon, Johnson and Kasey Kahne among them -- and that made for a frantic charge at the end on the quirky, country track.

Harvick was passed at the start by Logano, who led the first 37 laps, then moved back to the front and led for 137 of the next 185 laps.

The worst looking of the seven caution periods was with Paul Menard, who hit the wall yet stayed out, eventually sparking under the passenger side and igniting a small fire in the pits. No one was injured, although Menard's car was towed to the garage for repairs.

"I guess I was just in denial, I guess I didn't realize the right-front tire was down," Menard said.

Menard brought out another caution with 95 laps left, hitting the wall a second time.

The race teams get a break next week for the annual Easter holiday before resuming the season at Richmond International Raceway on April 26. Their next off weekend won't come until July 20, a week before the Brickyard 400 at Indianapolis Motor Speedway.