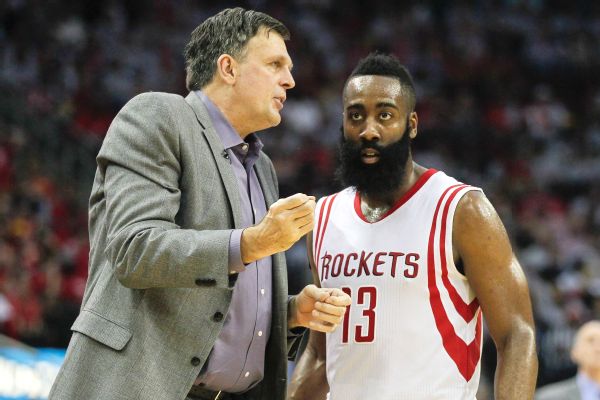 Harden is moving into the role under new coach Mike D'Antoni, and while he did lead shooting guards with a touch rate of 85.1 percent last season, McHale wonders whether Harden can become a facilitator first.

"You are who you are a lot of times," McHale, who will analyze games for TNT this season, said during a Tuesday conference call with reporters. "Can you change and be a facilitator first? I don't know. Kevin Garnett, a guy I go way, way back with -- Kevin Garnett was always a pass-first player. He was a pass-first player his first day of practice when he was with the Minnesota Timberwolves.

"James is a scorer, and at the end of the day, you do fall back on what you are. James is a scorer at heart. Can you change that? ... Can you be something that you're really not for an entire 82-game season? He's a great facilitator, great passer, and he has great vision -- he really is a scorer as a basketball player."

Those numbers are expected to increase under D'Antoni's up-tempo offense, which calls for spacing for outside shooting, the ability to push the pace and high pick-and-rolls.

Grant Hill played one season under D'Antoni in Phoenix during the 2007-08 season, when theSunsaveraged 110.1 points per game -- third best in the league.

Hill, along with McHale, doesn't see much difference in what Harden did in the past. However, there are some concerns about whether Harden can operate the offense efficiently.

"Now you have a guy in Harden, he wants to score and he's great at it, and I know he had seven-plus assists last year," Hill said. "But it's going to be interesting. The jury is still out. I'm not sure how it's all going to work. I think he will put up great numbers, and his numbers may even be better ... if that's possible from last year. In terms of how the team plays, how they play together, how they jell, I'm not entirely sure the style of play -- the position that Harden is in -- is going to translate to success with the team."

In three preseason games, Harden has averaged a league-leading 12 assists per game and is second in scoring at 23.3 points.