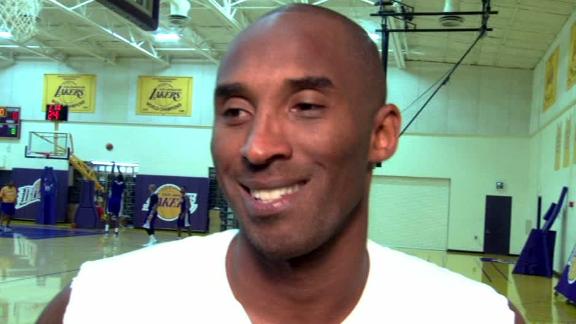 EL SEGUNDO, Calif. -- Kobe Bryant said he felt like himself after his first team practice in about 10 months as the Los Angeles Lakers opened training camp on Tuesday under new coach Byron Scott.

"I felt normal. I felt like myself," Bryant said. "That's a good thing."

Both players said they felt good after their first practice but will have their minutes monitored in camp and during the season. When the Lakers go through their first two-a-day practice on Wednesday, Bryant and Nash will only participate in the morning session, which will include a scrimmage.

"Kobe looked good," Scott said. "The first drill, the 10 minutes you could see the guys were in shape. Kobe looked good. Steve was in great shape. Both of those guys did about three-fourths of the practice. I basically had to ask Kobe to shut it down. We got another one tomorrow. He went through one more drill and then shut it down. He felt he felt great and could have done more but right now it's a progression of just going a little bit today."

Nash said this was probably his last training camp and he was just trying to enjoy going through the process of returning to the court and staying healthy so he could stay on the floor for what will likely be his last season in the NBA.

"I need to not get injured and I don't mean that in a factious way," Nash said. "It's important not get an ankle [injury] or a thigh bruise or all the little injuries and try to manage them as much as possible. If I can manage the amount of minutes I'm on the court and keep myself going and don't overdo it to where I can't recover, maybe I got a chance to play a lot more."

Bryant said Scott stressed the importance of defense and conditioning during practice and made them run to get them in shape to play better defense.

Scott smiled when he heard Bryant's comment and said that his practices weren't going to change anytime soon.

"Every day until we get to the point where I don't think we need to and I don't think that's going to happen," Scott said. "I know from my years of playing and coaching, that's what wins championships and that's something we have to continue to work on every single day."

Bryant said recovering from his torn Achilles tendon has actually given his career new life and admits he has the same questions and concerns as everyone else as he approaches this season.

"I love playing the game," Bryant said. "I truly enjoy it. The game was becoming a little stale but the Achilles injury ignited a new challenge for me personally to see if I can do this because you don't know. This was a challenge that presented itself to see if I can make this a successful comeback. My concerns are no different anybody else's in being able to comeback from this. A lot of it is the same thing. If I can prove to myself that I can do this I can prove it to everybody else as well."

The Lakers had a team dinner on Monday night before the start of training camp and Bryant said he's still getting to know his teammates. His longest tenured teammate is now Jordan Hill, 27, who was traded to the Lakers in 2012 for Derek Fisher. No one is left from Bryant's last championship winning team in 2010 after Pau Gasol left for Chicago.