Kyrie Irving, Kevin Love to suit up vs. Brooklyn 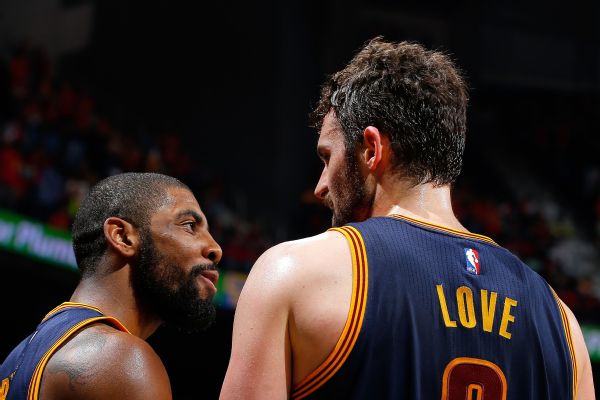 NEW YORK -- The Cleveland Cavaliers will welcome Kyrie Irving and Kevin Love back to the lineup for their game against the Brooklyn Nets on Friday, coach Tyronn Lue said at his team's shootaround Friday morning.

Irving missed the past three games with tightness in his right hamstring, while Love sat out Cleveland's loss to the Chicago Bulls on Wednesday as he recovered from food poisoning.

"Pretty miserable," Love said of his ordeal that started with eating sea bass that didn't sit well with him on the team's flight back from Charlotte last weekend. "When we got back from Charlotte, I stepped on the scale and that was a true number. Ten pounds. Thought I'd be OK to play, got an IV, came out and gave it all that I could, and then that kind of set me back another day.

"Felt it'd probably be best if I took a game because I wasn't feeling well. Now I feel pretty good. Just had to get some sleep, get some rest, get another IV in me, fluids, food and just try to get my appetite back."

Love ultimately required three IV drips and said he considered going to the hospital at one point because he was feeling so ill.

"I've never had food poisoning quite like that where every few minutes it'd come right out," Love said. "Sit back down, come right out. It was bad. But feel good now."

The All-Star forward said he has regained all but a couple of the pounds he had lost, sticking to a diet heavy on chicken soup.

While the Cavaliers went 2-1 in Irving's absence, they will surely welcome the return of his 23.9 points, 6.0 assists, 3.6 rebounds and 1.1 steals per game to the mix.

Love's 21.8 points, 10.9 rebounds, 1.7 assists and 1.1 steals per game will also help as Cleveland embarks on its longest road trip of the season -- six games through Brooklyn, Phoenix, Utah, Portland, Sacramento and Golden State.

Love, who laughed when noting that the Cavs' flight from Cleveland to New York on Thursday actually had sea bass as a menu option, said he is going to stay away from the fish on future flights.