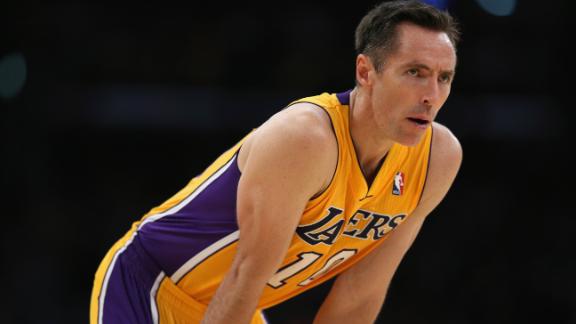 Lakers coach Byron Scott said the team was still gathering information about the nature of the injury, but Nash, a two-time league MVP, isn't likely to play in an exhibition game Thursday against the Utah Jazz.

The injury marked yet another setback for Nash, who appeared in just 15 games last season for the Lakers and has played sparingly this preseason, including asking to come out of Sunday's game for unspecified health issues.

Despite being consistently injured, Nash, the NBA's oldest active player, decided not to retire this offseason and instead returned to the Lakers, who will pay him about $9.7 million in the final year of a three-year, $28 million deal. Nash also said this summer that he believes this season -- his 19th -- will be his last.

On Tuesday, Scott intimated that he could be leaning toward starting Jeremy Lin at point guard.When asked if he has a long-term plan for what the Lakers will do if Nash continues to be sidelined, Scott said, "I haven't got there yet. And in a couple weeks, if the situation is the same, that's probably the type of way that I have to go. "