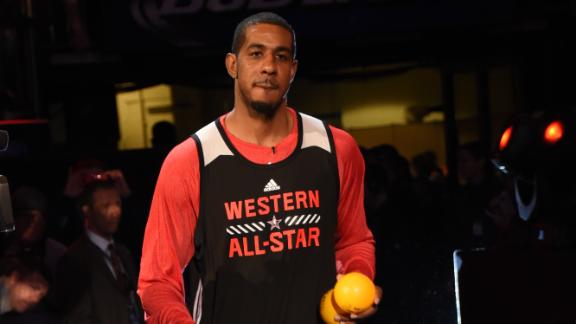 Aldridge, a Portland Trail Blazers forward, is taking the place of Davis in the starting lineup because of a shoulder sprain that caused the New Orleans Pelicans star to miss his team's last two games before the All-Star break.

Kerr had initially chosen to start Durant, theOklahoma City Thunder star, in Davis' place before changing his mind. Durant had said Saturday he expected to start Sunday, but also said he wouldn't play much due to nagging injuries.

Durant was voted in as a reserve by Western Conference coaches despite missing 27 of Oklahoma City's first 53 games due to injury. Durant, the reigning MVP, missed the start of this season while recovering from a fractured right foot. In 26 games since returning to action, he's averaging 25.9 points, 6.6 rebounds and 4.0 assists.

Davis hurt his shoulder in a Feb. 7loss at the Chicago Bulls when he lost his grip on the rim while completing an alley-oop dunk, falling about 7 feet horizontally to the hardwood.

"I just want to get back to 100 percent so I can get back on the floor with my team," Davis said Thursday during a conference call with New Orleans-based reporters.

Davis still plans to spend this weekend in New York, making appearances and watching from the sideline as his peers participate in basketball events.

"Without playing, it's still a good experience," Davis said, adding that he can learn plenty from simply spending time with elite players. "So I'm going to take full advantage of it."

Now in his third NBA season out of Kentucky and only 21 years old, Davis has averaged 24.5 points, 10.3 rebounds and 2.7 blocks per game this season, leading the Pelicans in all three categories.

Aldridge is the third substitute starter that Kerr has had to pick for an injured player. Aldridge is averaging 23.6 points and 10.3 rebounds in 47 games this season.

Earlier this week Kerr chose James Harden and Klay Thompson to start in place of the injured Kobe Bryant and Blake Griffin.