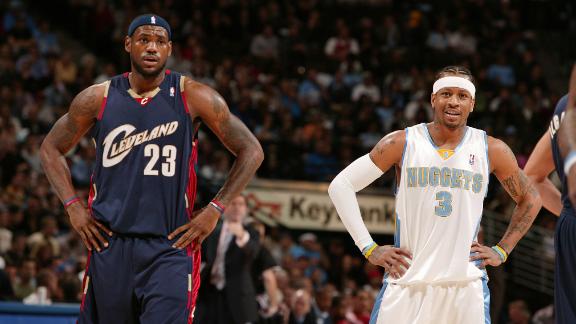 NEW YORK -- LeBron James passed one of his childhood heroes, Allen Iverson, for No. 22 on the NBA's all-time scoring list in the Cleveland Cavaliers' 101-83 win against the Knicks on Sunday.

James came into the day trailing Iverson by three points and wasted little time passing him, scoring four points in the first 1:33 of the game and leapfrogging the former Philadelphia 76ers star on a layup off an assist from Kevin Love.After finishing with 18 points against the Knicks, James has 24,383 points for his career.

"It's very, very humbling, and it's an honor to just be named with some of the greats that I watched growing up," James said after the game. "And now to know that I passed Allen Iverson on the all-time scoring list, for someone that's not much of a scorer -- as you guys have deemed me -- it is pretty cool."

James' sly dig at the media was presumably directed at the criticism he received early in his career for passing the ball rather than attempting shots late in games. Although he has won just one scoring title (2007-08) during his 12-year career thus far, James' 27.4 points-per-game career scoring average is the third-highest in league history, trailing only those ofMichael Jordan (30.12) and Wilt Chamberlain (30.07).

"It just means that my teammates have allowed me to do things to help them win ballgames, and I've been fortunate enough to go out and bless the game the best way I know how and just play hard," James added when asked to reflect on the accomplishment.

Passing Iverson on the scoring list was yet another accomplishment by James while playing at Madison Square Garden, where he has traditionally had big games.

He is 122 points behind the No. 21 player on the list, his formerMiami Heatteammate, Ray Allen.

Evaulating LeBron James' Game
In reaction to LeBron James passing Allen Iverson on the all-time scoring list, Skip Bayless and Stephen A. Smith reflect on LeBron James' ability as a scorer and in dealing assists.