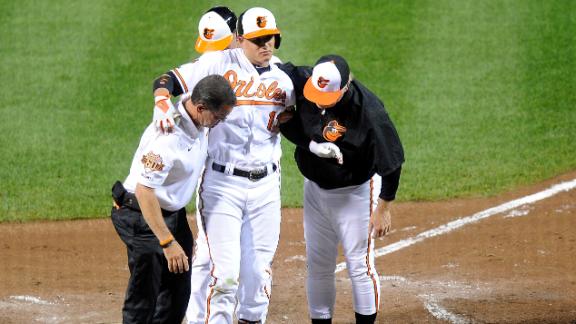 BALTIMORE -- Orioles third baseman Manny Machado hurt his right knee in a game against the New York Yankees and was helped off the field.

The team described the injury as a right knee sprain and said he would undergo an MRI Tuesday.

"We'll just wait for the results," Machado said in front of his locker, where a pair of crutches stood. "Hopefully it is on the good side other than the bad."

"There's a chance we may have dodged a bullet," manager Buck Showalter said.

Batting in the third inning Monday night, Machado twisted his knee while hitting a broken-bat grounder to shortstop. He dropped in a heap in the batter's box and gripped his knee in obvious pain as Derek Jeter made the throw to first base.

After a check by head trainer Richie Bancells, Machado limped off the field on the shoulders of Bancells and Showalter.

Earlier in the game, Machado doubled and scored on a sacrifice fly.

Chris Davis, who was not in Monday's starting lineup, took Machado's place and hit a two-run home run in the bottom of the fifth to give the Orioles a 4-3 lead. He wound up going 2-for-3 with two runs as the Orioles beat the Yankees 11-3 and dropped New York a season-high seven games out of first place.

Machado missed the first month of the season while recovering from surgery on his left knee.

"If you've been through what he'd kind of been through in the past, that initial feeling is pretty negative," Showalter told reporters after the game, "but the doctors have looked at it and everything. He's getting some best-case scenarios that we're going to dwell on until the MRI says something different."

Machado Injured In Orioles' Win
Manny Machado sprained his right knee while hitting a broken-bat grounder and left the game in the Orioles' 11-3 win over the Yankees.

Manny Machado Hurt In Orioles' Win
The Baseball Tonight crew discusses Manny Machado's injury and the impact it will have on the Orioles.